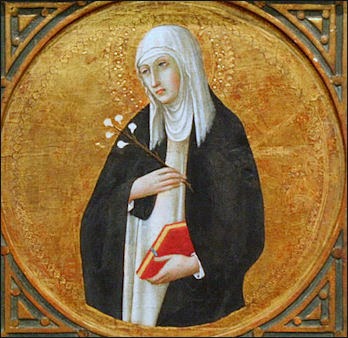 It just so happened that on a recent trip to Birmingham, Alabama, I began reading a biography of today's saint, Catherine of Siena. It was written by the Nobel Prize winning author Sigrid Undset. You can read more about this fine book at Ignatius Press.  St. Catherine died on this day in 1380 at the age of thirty-three.  She was an amazing woman who experienced many mystical graces including an exchange of hearts with Jesus and the stigmata which only became visible after her death because Catherine, in her humility, did not want the attention which the visible wounds would have brought her.  She was bold and courageous and did not shrink from writing to and meeting with the pope to tell him that he should leave his residence in Avignon, France and return to his diocese, Rome.

Here are some prayers of hers.  The first two are reflections on the Incarnation--the mystery that in order to save humanity, God became human.  St. Catherine asks why did God go to such lengths.

O great and eternal Trinity, as if intoxicated with love and gone mad over your creature, seeing that since it was separated from you who are life, it could produce only the fruit of death, you provided a remedy for it with the same love with which you had created it, and grafted your divinity on to the dead tree of our humanity. You who are the greatest sweetness deigned to unite yourself to our bitterness; you, who are brightness, with darkness; you, wisdom, with foolishness; you, life, with death; you, who are infinite, with us who are finite. What constrained you to this in order to restore us to life, after your creature had so injured you? Only love--for through this grafting, death is vanquished.

O eternal and infinite Good, O extravagance of love! You need your creature? Yes, it seems to me; because you behave as if you could not live without it, although you are life and all things receive life from you, and without you nothing lives.  You fell in love with your own workmanship and delighted in it as if enraptured with its well-being; it flees you and you go searching for it; it goes away from you and you draw near; you could not have come any nearer than in assuming its very humanity.

In the following prayer St. Catherine reflects again with wonder at the depths of God's love and in particular the gift of the Eucharist.

O eternal Trinity, O Trinity eternal! O fire and abyss of charity! O enamored of your creature! How could our redemption benefit you? It could not, for you, our God, have no need of us. To whom then comes this benefit? Only to man. O inestimable charity! Even as you, true God and true Man, gave yourself entirely to us, so also you left yourself entirely for us, to be our food, so that during our earthly pilgrimage we would not faint with weariness, but would be strengthened by you, our celestial Bread. O fire of love! Was it not enough for you to have created us to your image and likeness, and to have re-created us in grace through the Blood of your Son, without giving yourself wholly to us as our food, O God, divine Essence? What impelled you to do this? Your charity alone, in the excess of your love.

United to Jesus, loving with his Heart that beat within her, Catherine shared his love for humanity. She offered herself to God with these words:

Lord, you know why I cry out to you with daring confidence; because, when you inspire me with compassion and love, you are constraining me to raise my voice even to your throne. I see lost souls of innumerable sinners, and my heart breaks at the sight, or rather, my heart is enlarged and then, overcome with compassion, I cannot help weeping for their misfortune. I offer you my life, Lord, now and for ever, whenever it shall please you to take it, and I offer it for your glory, humbly beseeching you, by the merits of your passion to cleanse and purify the Church, your Spouse, from every defect; delay no longer!

Catherine also offered her life for the pope and for peace and unity within the Church:

O supreme and ineffable Godhead, I have sinned and am not worthy to pray to you, but you have the power to make me worthy. I have a body which I surrender and offer to you: here is my flesh and here is my blood. If it is your will, crumble my bones and flesh together for your Vicar on earth for whom I beg you to deign to hear me.  Give him a new heart, continually growing in grace, a strong heart to raise the standard of the holy cross in order to make those without faith share like ourselves in the fruits of the passion and of the blood of your only-begotten Son, the spotless Lamb.
Posted by Fr. James Kubicki, S.J. at 2:12 PM 1 comment: 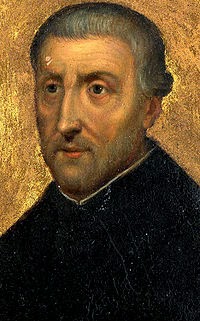 The liturgical calendar the Jesuit St. Peter Canisius on December 21, the date of his death in 1597, but today the Society of Jesus celebrates his feast day. After he was canonized and declared a doctor of the Church in 1925 his feast was assigned to this date and was so celebrated until the calendar was changed in 1969.  Jesuits continue to honor him on this day because the days right before Christmas focus on the coming celebration of the Nativity and give less attention to the saints.

St. Peter Canisius shows that the Church had a strong devotion to the Sacred Heart of Jesus before the apparitions to St. Margaret Mary in the 1670's.  St. Mechthilde of Hackeborn, a Benedictine nun who lived in the 1200's, wrote a book of prayers to the Sacred Heart.  St. Peter Canisius made a copy of these prayers, carried them with him wherever he went, and held fast to them on his deathbed.

He is known as the second apostle of Germany (after St. Boniface) and when he was about to set out to begin his mission there he wrote the following prayer:

"My Savior, I seemed to be gazing at the Heart of your Sacred Body with my own eyes. It was as if you opened it to me to drink from it as from a spring, inviting me to draw the waters of salvation from these springs of yours. I was filled with longing that the waters of faith, hope, and charity would flow from your Heart into me. ... Then I dared to touch your beloved Heart and bury my thirst in it; and you promised me a robe woven in three parts to cover my naked soul and help me greatly in my undertaking. These three parts were peace, love, and perseverance. Secure in the protection of this garment, I was confident that I would lack nothing, and that everything would turn out for your glory."

Peace, love, and perseverance: gifts from the Heart of Jesus. They allowed St. Peter to write a popular catechism and to explain the doctrines of the Catholic faith to Protestants and Catholics alike during a time of upheaval in Germany.  May the Church today receive these same gifts from the Sacred Heart of Jesus!
Posted by Fr. James Kubicki, S.J. at 5:06 PM 2 comments:

Mary, Mother of the Society of Jesus

On this day in 1541, seven months after Pope Paul III gave official approval to the founding of a new religious order, the Society of Jesus, and two weeks after his election as its first General Superior, St. Ignatius and his first companions celebrated Mass at Mary's altar in St. Paul Outside-the-Walls in Rome. Before receiving Holy Communion, Ignatius held the consecrated host and each of the first Jesuits pronounced his vows. Then they received. April 22 is now celebrated in the Jesuits as the Feast of the Blessed Virgin Mary, Mother of the Society of Jesus.

St. Ignatius had a deep devotion to Mary. She played a critical role in his conversion. One night in mid-August, 1521, she, with the Child Jesus, appeared to him.  He writes about this, using the third person, in his Autobiography:

"One night, while he lay awake, he saw clearly the likeness of Our Lady with the Holy Child Jesus, at the sight of which he received most abundant consolation for a considerable period of time. He felt so great a disgust with his past life, especially his sins of the flesh, that he thought all such images which had formerly occupied his mind were wiped out." 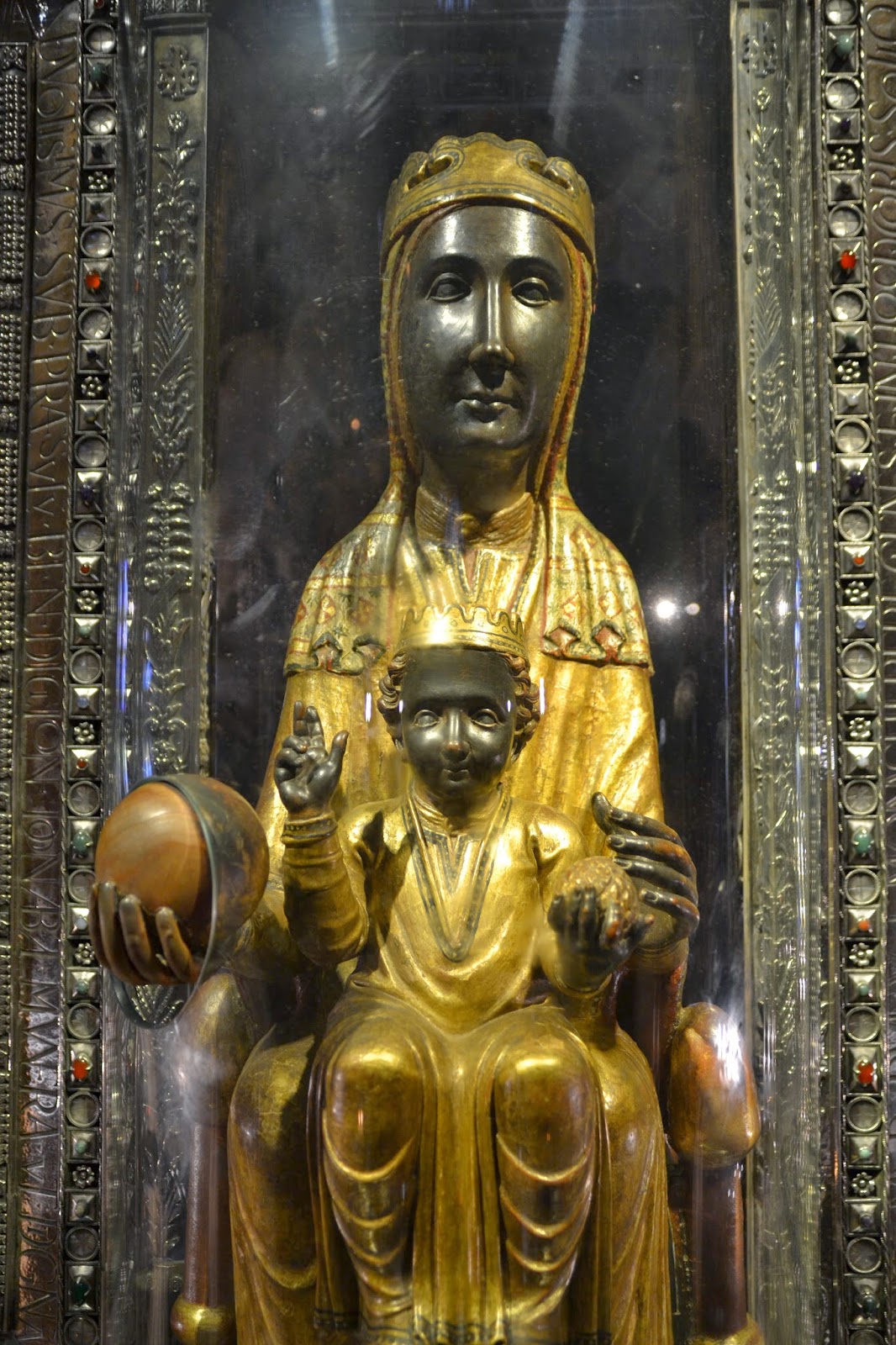 On the eve of the Annunciation in 1522, St. Ignatius made an all-night vigil at the Shrine of the Madonna of Montserrat. He left behind his sword and dagger and offered himself to Mary and her Son as their knight.

I've always considered Mary to be the Mother of my Jesuit vocation. As a high school student I began praying the rosary which became a chain linking me to Mary through various tests and trials.  In the past, Jesuits took "vow names" which never replaced their actual name as happens in other religious orders but which were a simple act of devotion. When I pronounced my first vows in 1973, I took the name "Mary." Since my middle initial is "M" for Michael, this has worked out well and whenever I use that initial I think of these two patrons--Michael the Archangel and Mary, Mother of my vocation and of the Society of Jesus.

Jesuits' devotion to Mary clearly shows up in our present pope who often prays to her and visits the Church of St. Mary Major before and after every trip abroad.

Here are the prayers which I and some of my brother Jesuits used as we celebrated Mass together this morning:

Collect:  "Almighty and everlasting God, you chose the Virgin Mary to be the mother of your eternal Word. Make us strong and faithful servants of that Word in the Society of Jesus, which has consecrated itself to you in the presence of Mary, our mother."

Prayer over the Gifts: "Lord God, you made the Virgin Mary a companion in the sufferings of your Son and in the glory of his resurrection. Turn our eyes toward him whom we have pierced, so that, seeking his kingdom on earth, we may enter eternal life with Mary, our mother."

Prayer after Communion: "You have raised up Mary, O Lord, because she believed in your word. By the grace of her Son, may we, who call her blessed, experience the power of her intercession."
Posted by Fr. James Kubicki, S.J. at 12:52 PM 1 comment: