The Priesthood of the Baptized 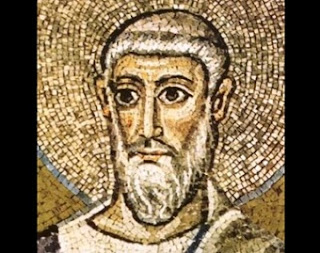 Today is the feast of St. Peter Chrysologus, a bishop and doctor of the Church whose preaching was so inspired that he was called "Golden Word." He only lived about fifty years, but the 183 sermons of his that we have continue to speak to us over 1500 years after his death. In one of them, he reflects on St. Paul’s Letter to the Romans, 12: 1: “I urge you, therefore, brothers and sisters, by the mercies of God, to offer your bodies as a living sacrifice, holy and pleasing to God, your spiritual worship.”  These words are at the heart of what we strive to do in the Apostleship of Prayer: to live a Eucharistic life, a life in which we offer ourselves one day at a time with Jesus who offers himself to the Father for the salvation of the world.  The following is from Homily 108 of St. Peter Chrysologus:

How marvelous is the priesthood of the Christian, for he is both the victim that is offered on his own behalf, and the priest who makes the offering.  He does not need to go beyond himself to seek what he is to immolate to God: with himself and in himself he brings the sacrifice he is to offer God for himself.  The victim remains and the priest remains, always one and the same.  Immolated, the victim still lives: the priest who immolates cannot kill.  Truly it is an amazing sacrifice in which a body is offered without being slain and blood is offered without being shed.

Paul says: “I appeal to you by the mercy of God to present your bodies as a sacrifice, living and holy.”  The prophet said the same thing: “Sacrifices and offering you did not desire, but you have prepared a body for me.”  Each of us is called to be both a sacrifice to God and his priest.  Do not forfeit what divine authority confers on you.  Put on the garment of holiness, gird yourself with the belt of chastity.  Let Christ be your helmet, let the cross on your forehead be your unfailing protection.  Your breastplate should be the knowledge of God that he himself has given you.  Keep burning continually the sweet smelling incense of prayer.  Take up the sword of the Spirit.  Let your heart be an altar.  Then, with full confidence in God, present your body for sacrifice.  God desires not death, but faith; God thirsts not for blood, but for self-surrender; God is appeased not by slaughter, but by the offering of your free will.
Posted by Fr. James Kubicki, S.J. at 9:20 AM No comments:

The readings at Mass today (15th Sunday Ordinary Time, Cycle B) are about vocation. In the first reading (Amos 7: 12-15) we hear about the call of a prophet who never planned on being one. In the Gospel (Mark 6: 7-13) we see how Jesus "summoned" the apostles and sent them out on a mission trip to confront evil and sickness head-on.  But I want to focus on the second reading from the first chapter of the Letter to the Ephesians.

When did God call you?  When did God choose you?  Paul's answer may be surprising.  He writes that God chose us "before the foundation of the world."  In other words, before this world was created, God had you in mind. Shortly after his election as pope, Benedict XVI told the cardinals that "each of us is the result of a thought of God." And since those thoughts are eternal, God had you in mind from all eternity.

Why?  Why did God choose to create you and call you?  Pope St. John Paul II said that "each person is unique, precious, and unrepeatable."  There never was, never will, and isn't another "you" among the billions of human beings.  You give God a joy and pleasure that no other human being can.

You were chosen to be holy, like God. For that to happen a transformation is required.  This is where another word that Paul uses comes into play: "In love he destined us for adoption to himself through Jesus Christ."  Through baptism we became adopted children of God. However, when we say that we're speaking of something deeper than human adoption.  Human adoption is beautiful.  Parents give a child their name and their love, food and shelter and education. But parents cannot give an adopted child their own genetic makeup, their blood.  With God it's different. An interior transformation takes place. Through baptism a real change occurs.  God gives us grace to transform us into true children of God.  This is our deepest identity.   A person at baptism is flooded with sanctifying grace and is "holy and without blemish."

Now we are called to live out of our deepest identity: to be and to act what we truly are--children of God, joined to Christ, members of his Body.

All Christians have this most basic vocation and it is within this context that other calls are heard, other vocations arise.

Today is the wedding anniversary of a very special couple. They had nine children, four of whom died early. Four of the surviving children became Discalced Carmelite Sisters and one became a Visitation Sister.  The cause for the beatification of the latter, Leonie, has just been opened.  Of the four other daughters, one has been canonized--St. Therese of Lisieux. And the parents, who celebrate their anniversary today in heaven--Louis and Zelie Martin--will soon become the first married couple in the history of the Church to be canonized together.

You can find out more about this beautiful family at the following websites: