Giving All with Love

I became an uncle at the ripe age of seven and so I wasn't much older than my nieces and nephews.  Sometimes when I played with them and had a toy of theirs, they would grab for it even if their own hands were filled with toys.  They had to let go of one in order to have the one they wanted, the one that I had.

I thought of that in the light of today's Mass readings which teach us that it is only the empty hand that can receive.  Or as the Peace Prayer attributed to St. Francis of Assisi goes: "It is in giving that we receive."

Our first reading (1 Kings 17: 10-16) tells the story of how a non-Jewish widow helped the great prophet of Israel, Elijah.  She was dirt poor.  She had only a hungry child and a little oil and flour.  There was no "safety net" in her society.  A terrible drought had ravaged the land.  She was about to prepare a final meal when Elijah came along and asked her for water and food.  Something about the prophet moved her to give away part of her food.  She could have held on to it, not shared, and then, it would indeed have been her last meal.  But her charity to the wandering Jewish prophet opened the way for God's power to perform a miracle.  The jug of oil did not run dry and the jar of flour did not go empty for an entire year.

In the gospel (Mark 12: 38-44) we see another widow.  We see her in contrast to religious leaders and wealthy people who make a show of putting large amounts of money into the temple treasury.  Ashamed of how little she has to give, she tries to put two small coins into the treasury hoping no one will notice her meager offering.  But Jesus notices and praises her.  The others gave vast sums from their surplus, from what they could afford to give and not experience any threat to their lifestyle.  She gave sacrificially, from what she could not afford to give.  They gave for show, to win the attention and admiration of the crowd.  She gave for one simple reason--for love of God.

Perhaps Jesus saw in her a reflection of himself.

Like her, Jesus did not hold back.  He gave all.  He gave his very life, sacrificing it on a cross.  And he continues to give all.

Every celebration of Mass makes present that total offering of Jesus on the cross.  As the second reading (Hebrews 9: 24-28) says, he gave "once for all."  He does not need to die again and again.  But in a mysterious and miraculous way he makes that "once for all" offering of himself present in every celebration of the Holy Sacrifice of the Mass.  And after making this offering present to us, he gives himself totally to us--body and blood, soul and divinity--in Holy Communion.  He holds nothing back but gives himself totally to each one who receives him in the Eucharist.  This gift of himself, which we receive with open hands and hearts, gives us the ability to love as he loved.

How can we give all to God?  Let me make a few practical suggestions.

First, at every Mass, as the bread and wine are placed on the altar and then lifted up as the Body and Blood of Christ, we place ourselves on the altar and join ourselves to Jesus' perfect offering of himself to the Father.  It is important to be aware of this, to consciously unite ourselves to Jesus' offering as he is lifted up and makes his total, self-sacrificing offering of himself present to us.  It's also important to have an intention for which we are praying as we join our offering to that of Jesus.

Second, we are called to live, in our daily lives, the offering we make with Jesus at Mass.  This is where a Daily or Morning Offering Prayer can help us.  It can be as simple as waking up and, before getting out of bed, thanking God for another day and offering that day to God.  We can tell God in our own words that we want to offer every thought, word, and deed of the day; every breath and beat of our hearts; every prayer, work, joy, and suffering of the day in union with his total offering on the cross and at Mass.  Then, during the day, especially when we encounter something challenging and difficult, something frustrating and painful, something we would rather not have to face or do, we can renew the offering, telling God that we are going to do this thing we have to do out of love for God and neighbor, as an act of love and for the salvation of every human soul.

Those things that we offer to God may seem very small in comparison to great acts of love for God, like martyrdom.  They may seem very insignificant.  But remember the two widows.  The widow of Zarephath offered the little she had and her charity led to a miracle.  And Jesus said the widow in the temple gave the most because she gave her all out of love.  What matters to Jesus is not the amount, but the love that motivates the giving.
Posted by Fr. James Kubicki, S.J. at 4:00 PM No comments:

A Spiritual View of Anorexia Nervosa 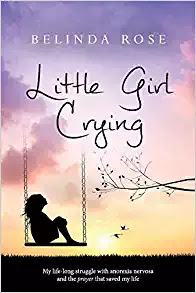 When I was given a copy of the book "Little Girl Crying" by Belinda Rose I was intimidated.  Not by the subject: anorexia nervosa and how the author came to complete healing through prayer.  I was intimidated by its length.  I wondered how I could squeeze in the time for this large book in the midst of my busy life.  I can honestly report that finding time was not a problem.  This book reads like a thriller but instead of "who done it?" the question in this fast-paced account of the causes and the struggle of anorexia is "how will she ever come out of it?"  In the course of 450 pages I came to a better understanding of anorexia and more.  Let me highlight three other lessons that can be learned by reading "Little Girl Crying."

First, the struggle with anorexia nervosa is a paradigm for all human struggle.  Deep down, in every human being, there is a hunger, a hunger to be loved, a longing to know that one is lovable.  Human loves can satisfy that hunger for a while but they do not ultimately fulfill us, for, as St. Augustine wrote: "You have made us for yourself, O Lord, and our hearts are restless until they rest in you."  We are made with a hunger for an infinite love that no finite, human love can satisfy.  Only God's love can because God is an infinite love by nature.  Until the author discovered this truth through contemplative prayer she continued a self-destructive cycle of binge eating and purging, always convinced that she was fat and unlovable even at 70 lbs.! Whatever one does or does not do to fill the hunger for God will fail unless God is the object of one's desire.

Secondly, I was reminded of another book, "Legacy of the Heart: The Spiritual Advantages of a Painful Childhood" by Wayne Muller.  As a drought forces the roots of a tree to go deeper or the tree will die, so the struggles of childhood can lead one to sink deeper roots.  Deeper into what?  One's relationship with God, certainly, but also into one's relationships with others.  Belinda Rose's struggles ultimately led her into deeper relationships with her three sons, her mother, and others who struggled with psychological illnesses.  From deep pain can come, with God's saving grace, greater compassion and more joy, so much so that Rose can say, like many in 12 Step Recovery Programs, she is ultimately grateful for how her disease led her to these deeper relationships.

Thirdly, one of the key elements of healing is forgiveness.  Past hurts can leave one bitter.  But bitter unforgiveness and resentment are the fuel that drives the engine of addictions and anorexia.  When it is not dealt with, emotional hurt festers and grows, morphing into an anger which, for those who feel vulnerable and helpless, is turned in on itself.  It's been said that resentment is like drinking from a bottle of poison and hoping that the person who hurt us will die.  As she began to deal with the painful memories that stoked her disease, Rose developed empathy.  A key moment came when she began to understand what led her father to hurt her as he had done.  She learned the truth that "hurt people hurt people."  She prayed and forgave and healed.  In time she learned to imitate Jesus in his redemptive suffering.  Jesus--totally innocent--was hurt and abused.  He suffered terribly but offered his suffering as a powerful prayer to the Father and saved the world.  Rose learned to use her sufferings for others as Jesus did.

I highly recommend "Little Girl Crying" in order to understand anorexia nervosa and so much more.  Its lessons are universal, for hurt and the need for healing--both individually and globally--are universal.
Posted by Fr. James Kubicki, S.J. at 3:05 PM No comments: