Archbishop Dolan, an Apostle of Prayer 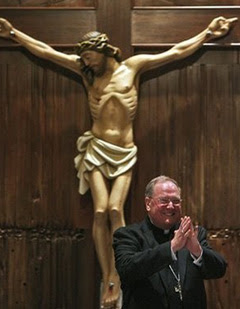 The news was announced today that Archbishop Timothy Dolan will be leaving Milwaukee to become the next Archbishop of New York. Milwaukee is the location of the national office of the Apostleship of Prayer and we will miss this great friend of ours and of the Sacred Heart of Jesus. When he became the Archbishop of Milwaukee on August 28, 2002 he handed out a card with his picture and on the back significant dates in his life--his baptism, his ordinations as deacon, priest, and bishop. And then, under the dates, as a declaration of love for the Sacred Heart of Jesus, these words:

Yes, Archbishop Timothy Dolan is a true friend and apostle of the Sacred Heart of Jesus. On June 15, 2007 he renewed the 1899 Consecration of the Archdiocese of Milwaukee to the Sacred Heart. And on October 7, 2008 he re-entrusted the Archdiocese to the Immaculate Heart of Mary. From 2006 to 2008 he served on the Board of Directors for the Apostleship of Prayer in the U.S.

I became the national director of the Apostleship of Prayer in 2003 and shortly after I arrived in Milwaukee I made an appointment to meet with Archbishop Dolan. He wrote about our meeting later that year in "The Priest" magazine. Here's what he wrote:

It was going to be a hectic day. As I previewed my schedule, I could see that I had some tough meetings, with some neuralgic decisions to make on a parish merger, elimination of some staff positions due to a budget shortfall, a "come to Jesus" meeting with a brother priest whose drinking was causing a lot of concern and a group of parents upset about the catechesis in their parish school.

But one half-hour on the calendar vexed me most. Sandwiched in between all these "important" meetings was one that seemed perfunctory and unnecessary, and I was peeved that, on such a demanding day, I had to "waste" 30 minutes on such a "low priority" matter. Maybe I could have it rescheduled.

But he came, and the half-hour--it actually wound up going longer--ended up, so I concluded at compline that night, the most memorable and significant session of that "Excedrin day."

This appointment was with a Jesuit, who works out of Milwaukee, as director of the national office for the Apostleship of Prayer. Remember that? I sure did as he spoke, recalling the morning offering on the mirror in the bathroom at home growing-up, so we could dedicate the day to the Lord every morning as we washed our face and brushed our teeth.

As this priest movingly described his simple ministry, things seemed to calm down and become focused as he spoke of a project so simple it was downright profound: grounding each day in the Lord through a morning offering, conscious of a supernatural solidarity with millions of others within the communion of saints doing the same.

What sticks with me from that encounter is the call to a simple grounding in my life. ... What seems clear is that Jesus is calling [us] to simplicity, to a renewal of the basics in our spiritual life. As Jesus challenged, "Seek ye first the kingdom of God!..."

Bishop Fulton Sheen said that "the mark of a Catholic is to find the divine in the most ordinary and simplest places." He explained that our simple faith summons us "to find the divine in a baby in the arms of his mother at Bethlehem, in prayers tolled on beads, in bread and wine, and in the voice of an old man in Rome." ...

That demanding day with all its critical appointments "grounded" me in the visit of that brother priest who spoke to me about something as simple as turning to the Lord first thing every morning and offering the day to Him.

Thank you, Archbishop Dolan! Continue to stay close to the Heart of Jesus in your new assignment. May His Kingdom grow in New York as you place all your trust in Him.
Posted by Fr. James Kubicki, S.J. at 9:11 AM