I'm in Wernersville, Pennsylvania, about an hour west of Philadelphia. The Jesuit Spirituality Center where I'm staying used to be the Novitiate for the Maryland Province of the Jesuits. It's a beautiful location and I'm here giving a retreat to students and staff of the John Paul II Institute on Marriage and Family Life, a Pontifical Institute that's part of Catholic University in Washington, DC.

After Mass today Michael, a seminarian of the Washington 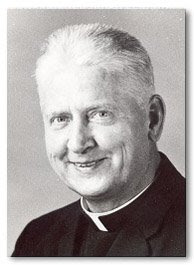 Archdiocese, introduced himself and after I told him I was director of the Apostleship of Prayer he told me that the reason he decided to make his retreat here was because of Fr. Walter Ciszek, S.J. Fr. Ciszek wrote "With God in Russia" and "He Leadeth Me", two books in which he related his experience of spending about twenty-three years in Soviet prisons, prison camps, and exile in Siberia. His cause for beatification has been introduced in Rome. Fr. Ciszek spent part of his Jesuit formation here in Wernersville, was part of the Apostleship of Prayer, and is buried in the Jesuit cemetery here.

Michael told me how to get to the cemetery and so I made a pilgrimage and, among the graves of many Jesuits whom I didn't know and some whom I did, I found his simple grave. I prayed. I thanked him for his perseverance and his witness, and for something he wrote in "He Leadeth Me":

"In prayer we speak to God, we ask his help, we seek his pardon or we promise amends, we thank him for favors received. But we cannot pray as if we were talking to the empty air; so in the very act of praying we unconsciously remind ourselves of the reality and presence of God, thereby strengthening our belief in him. And that is why, again in my opinion, the Morning Offering is still one of the best practices of prayer--no matter how old-fasioned some may think it. For in it, at the beginning of each day, we accept from God and offer back to him all the prayers, works, and sufferings of the day, and so serve to remind ourselves once again of his providence and his kingdom."

I prayed for Fr. Ciszek and to him, asking him to intercede for all those who are following his path of making a Morning Offering--all Apostles of Prayer.

As I was leaving I saw another grave with a name I recognized--Fr. Robert McAllistor, S.J. I never met him but he was the director of the Apostleship of Prayer in the U.S. before my immediate predecessor. He kept the Apostleship going during the turbulent 70's and 80's when many Catholics had rejected devotion to the Sacred Heart of Jesus and weren't interested in the Pope's monthly prayer intentions. I stopped at his grave as well and thanked him for all his hard work. I asked him to intercede for us now, to help in the revival of the Apostleship of Prayer in the U.S. I sense he smiled at my visit, and at seeing how the new technologies, like this blog, are allowing us to reach out to many more people and a new generation of Apostles.