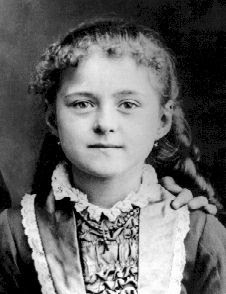 Today is a feast day for the Apostleship of Prayer. We are celebrating one of our two patron saints, St. Therese, who enrolled in the Apostleship of Prayer on October 15, 1885 when she was twelve years old. St. Therese is often called "The Little Flower," a self-description that comes from her autobiography. Here's how she tells the story of her father's response when she shared with him her desire to become a Carmelite Sister:
"Going up to a low wall, he pointed to some little white flowers, like lilies in miniature, and plucking one of them, he gave it to me, explaining the care with which God brought it into being and preserved it to that very day. While I listened I believed I was hearing my own story, so great was the resemblance between what Jesus had done for the little flower and little Therese."
The theme of "little flowers" shows up later in her description of how she made offerings of the moments of her day, especially the pains and sacrifices:

"Yes, my Beloved, this is how my life will be consumed. I have no other means of proving my love for you other than that of strewing flowers, that is, not allowing one little sacrifice to escape, not one look, one word, profiting by all the smallest things and doing them through love. ... O my Jesus! I love You! I love the Church, my Mother! I recall that "the smallest act of PURE LOVE is of more value to her than all other works together" (St. John of the Cross's "Spiritual Canticle").
This was the secret of St. Therese, the key to her holiness. She lived out her commitment to the primary duty of members of the Apostleship of Prayer--to pray the Daily Offering one day at a time. She prayed it and then, with God's grace, lived it. Truly she's an example for all Apostles of Prayer and for all Christians.
Posted by Fr. James Kubicki, S.J. at 3:23 PM