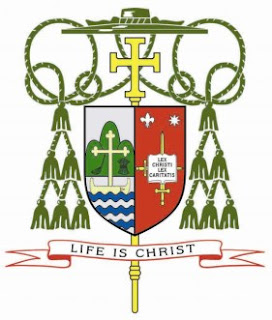 There is a lot of excitement today in Milwaukee, where the national office of the Apostleship of Prayer is located. A new Archbishop was named to replace Archbishop Timothy Dolan. Archbishop Dolan is a member of the Apostleship of Prayer who learned about the Morning Offering from his father, and he is deeply devoted to the Sacred Heart of Jesus. What about our new Archbishop?
I met Bishop Listecki a couple years ago as he was vesting in the sacristy at Marytown, in Libertyville, IL. He was about to celebrate Mass and I was part of a group of priests that was preparing to concelebrate with him. When I introduced myself he showed immediate recognition of the Apostleship of Prayer and smiled. And his devotion to the Sacred Heart? Here's what a priest of the La Crosse Diocese where he has been Bishop for almost five years wrote about Bishop Listecki's Coat of Arms:

The red on the shield is employed for His Excellency's deep devotion to the Sacred Heart. The majority of the charges of the design are rendered in silver (white) which, with the red, are the colors of the Polish national flag. By these colors His Excellency honors the ethnic heritage that has come to him from his parents, Harry and Alfreda (Kasprzk) Listecki.
Naturally I was very happy to learn of Bishop Listecki's devotion and, being 100% Polish myself, I can't help rejoicing in his ethnic heritage as well!
Posted by Fr. James Kubicki, S.J. at 12:25 PM