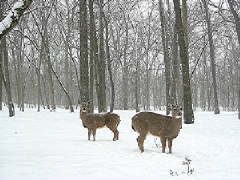 Over the weekend I gave a retreat at the Cardinal Strich Retreat House in Mundelein, IL to about 40 deacons and their wives. In the past few years I'd given retreats there to priests from the Gary Diocese and the Chicago Archdiocese, and last summer Deacon Richard Hudzik, the director of the retreat house, asked me to come and give a retreat to deacon couples from Chicago. He has been interested in the spirituality of the Sacred Heart and wanted me to give a retreat with that theme. In fact, he blogged about the Sacred Heart last July and expressed some of the mixed feelings that many Catholics have about this devotion.

The retreat consisted of five talks. In the first, on Friday evening, we entered into the quiet space of the retreat by hearing the invitation, "Draw Near to His Heart." On Saturday morning I told what I like to call "The True Love Story," talking about how devotion to the Sacred Heart of Jesus begins with God's devotion to humanity, His love for each and for all. Our devotion or love is always a response to God who loved us first, creating us and redeeming us. Then in the afternoon and evening I gave two talks in which I shared much of what I recently said in Cleveland: that we can grow in our devotion to the Heart of Jesus by entering more deeply into the thoughts and feelings of His Heart as we imaginatively pray with the Gospels; that we are given the Heart of Jesus in the Holy Eucharist to transform our hearts. On Sunday morning I spoke about "Living the Eucharist" by praying the daily offering that the Apostleship of Prayer promotes.
It was a blessed time for me. I found an old saying about giving retreats true: "In giving a retreat you also make the retreat." Besides praying with a wonderful group of deacon couples, one of whom was in the first class ordained in Chicago (1972) after the Second Vatican Council and some of whom were ordained as recently as 2003, I enjoyed the hospitality and community that I've always found when deacon couples gather. The other blessing was that they were clearly inspired to share the Eucharistic spirituality of the Apostleship of Prayer with their parish communities.
Posted by Fr. James Kubicki, S.J. at 1:17 PM