I like to tell the story of the time that I met with a group of grade school children at St. James Parish in Mukwonago, Wisconsin. I had finished everything I'd planned to say to them and still had 10 minutes left, so I asked if they had any questions. One little boy raised his hand and asked, "What's Jesus' middle name?" I pretty much knew where he was coming from with this question and so I asked him, "What's Jesus' last name?" "Christ," was his response, and this gave me the opportunity to talk about names at the time of Jesus and how "Christ" was not Jesus' last name but a title that means "The Anointed." Jesus didn't have a last name or a middle name the way we do. He would have been known as "Jesus bar Joseph," Jesus, the son of Joseph.
We see this as well in today's Gospel, the story of Bartimaeus. Mark 10: 46 says that as Jesus left Jericho, He encountered "Bartimaeus, a blind man, the son of Timaeus." Actually this is redundant. "Bartimaeus" means "Son of Timaeus." What was the man's first name? We don't know. It is as though, blind beggar that he was, no one really knew him. No one bothered to learn his name. He was just the blind beggar of Jericho, Timaeus' son. 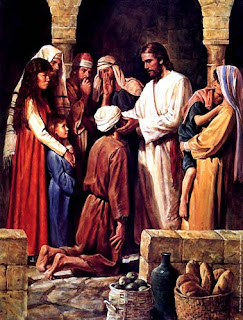 Jesus, on the other hand, treats him with the utmost respect. Bartimaeus cries out, "Jesus, Son of David, have pity on me." Notice: he doesn't call Him, Son of Joseph, but makes an act of faith in Jesus as the Messiah, the long-awaited Son of King David. And what does Jesus do? He asks him, "What do you want me to do for you?" Wouldn't it have been obvious to anyone, especially Jesus, that this blind beggar wanted to be healed? Yet Jesus treats him with respect. He doesn't make assumptions or jump to conclusions. He allows the man without a first name to articulate his desire. Only after hearing the man tell Him what he wanted--"I want to see"--does Jesus send him on his way healed.
Sometimes people wonder why we make intercessory prayer. Why do we ask for what we need when God knows everything, all that is in our hearts? God treats us with the utmost respect and doesn't assume that we really want what we think we want. God gives us time to think about what we're praying for and to ask with faith. In this way God shows us that He respects us and we grow in our faith by exercising it.
Posted by Fr. James Kubicki, S.J. at 10:17 AM

Email ThisBlogThis!Share to TwitterShare to FacebookShare to Pinterest
Labels: Prayer