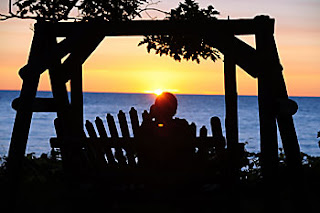 Though I grew up in Milwaukee, Wisconsin, I'd never been to Door County, the peninsula that sticks out into Lake Michigan and forms the bay for which the city of Green Bay was named. I'd never been there, that is, until this weekend.

The Diocese of Green Bay has a gem called "Holy Name Retreat House" that is located on Chambers Island, a 45 minute boat ride from the harbor in the town of Fish Creek. I gave a retreat there from Friday to Sunday on the theme "Put out into the Deep: Entering into the Heart of Jesus." My first talk was the homily at Mass on Friday evening and the two talks on Saturday were "The True Love Story: the Sacred Heart of Jesus" and "Entering into the Heart of Jesus through Word and Sacrament." On Saturday evening we celebrated a reconciliation service during a holy hour of exposition, adoration, and benediction. The retreat ended on Sunday morning with a talk on "Living in Union with the Eucharistic Heart of Jesus through the Apostleship of Prayer" and with Mass for which some of the 60 or so "Islanders" joined us. Holy Name Retreat House, which is celebrating its 60th year, is a beautiful, holy place, one of only two English-speaking island retreat houses in the world, and I highly recommend it.

On my way to Door County I stopped at the shrine of Our Lady of Good Help, the first and only Church-approved Marian apparition site in the U.S. There is a small church and in the crypt under it is a statue marking the place where Mary appeared in 1859 to a twenty-eight year old Belgian immigrant named Adele Brise.

I also visited the Catholic Youth Expedition camp located in Baileys Harbor. I know several of the staff members and it was a pleasure to spend some time with them, get a tour of the facility, meet some of the other young and enthusiastic staff members, pray the Chaplet of Divine Mercy with them, and have lunch. They were getting the place ready for the 140 people who were coming for the Father's Day Weekend Family Expedition.


Though it was a grace to experience for the first time God's beautiful creation--Door County--I am savoring the greater grace of experiencing God's work at the shrine and in the lives of the enthusiastic and faith-filled people at the Catholic Youth Expeditions and Holy Name Retreat House.
Posted by Fr. James Kubicki, S.J. at 10:01 AM