The Martyrs of Korea

Today is the feast day of the Martyrs of Korea, faithful Catholics who died for the faith in the Nineteenth Century and who were canonized in 1984 when Blessed John Paul II visited their native land. I visited there two years before and I couldn't help thinking about that trip today.

It was the summer of 1982, a few months before I was ordained a transitional deacon, and I went to Korea with a Jesuit friend, Fr. Larry Gillick. For the six weeks that we were there I served as his eyes and he served as my mentor in giving retreats around the country. You see, Fr. Gillick has been blind since an accident that took his eyesight when he was only seven.

We spent much of our thirteen hour flight from Seattle to Seoul worrying and fretting. What if the Jesuits who were supposed to meet us there didn't show up? How would we communicate with people and find our way to the Jesuit University of Sogang? What if they wouldn't let Fr. Gillick's big green tape player through Customs? What if we got sick from the food? What if we caught a strange Asian disease? And, one of the scariest thoughts, how were we ever going to manage the Korean toilets which we had heard were holes in concrete slabs and not Western-style "thrones?" It was one thing for me to consider this but it certainly caused more panic in my blind friend.

As we approached Kimpo Airport we finally did what we should have been doing instead of worrying. We prayed. Instead of surrendering to the anxiety, we surrendered to God and asked Him to get us safely through the coming six weeks.

Every night we sat down and wrote about the adventures of the day and God's goodness to us. We ended up calling this Journal "Kam-sa-ham-nida" which means "Thank you." For God answered our prayer as we had hoped and took great care of us. 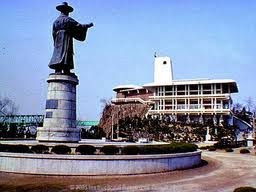 couldn't help thinking of our anxiety in contrast to the courage of the Korean Martyrs. We visited their shrine which is located on a high hill overlooking the Han River where many of them were thrown over the cliff to their deaths below. In the shrine was a museum with many of the gruesome instruments of torture that were used to elicit their denial of the faith. Surely some of them, especially those who were mere children, must have been afraid. But their faith and courage prevailed. God took care of them too, though not in a way that added to their time on earth. He took them to Himself in heaven and we are able to celebrate them today.

The fear that Fr. Gillick and I experienced as we flew across the Pacific Ocean seems so foolish now in light of what those Martyrs faced. Yet, we shouldn't compare. We all have fears and anxieties that at the time can seem pretty major. In facing them and not letting them control us the trick is the same one that those Korean Martyrs employed, the same one that we two traveling and fearful Jesuits employed. Prayer.

This is what St. Paul prescribed against anxiety as well:

"Have no anxiety at all, but in everything, by prayer and petition, with thanksgiving, make your requests known to God. Then the peace of God that surpasses all understanding will guard your hearts and minds in Christ Jesus" (Philippians 4: 6-7).
Posted by Fr. James Kubicki, S.J. at 11:37 AM