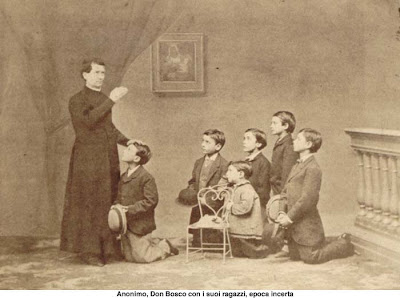 Today is the feast of one of my favorite saints, St. John Bosco. When I was growing up in Milwaukee there was a high school named "Don Bosco" and I always thought "Don" was his first name. Years later I learned that "John" or "Giovanni," as he would have been known in his native Italy, was his name and "Don" is a title that is often used for priests in Italy.

So it should not be surprising that God would continue to speak to Spirit-filled people in their dreams.

But what I find amazing is that for St. John Bosco, this began when he was only nine years old.

Writing about this in his "Biographical Memoirs," St. John Bosco said that around 1824 when he was nine he had a dream in which a group of children were playing in a large field near his home. Some of them were cursing and he was so shocked by this that he jumped in, shouted at them to stop, and started swinging his fists. A man dressed in white with a glowing face appeared and told him to become the leader of these boys, saying, "You will have to win these friends of yours not with blows but with gentleness and kindness. So begin right now to show them that sin is ugly and virtue beautiful."

John Bosco asked how he, a mere boy and the peer of these other boys, could talk to them about religion. At that, the boys stopped cursing and fighting and gathered around the man in white who told John to ask his Mother for help. Then he saw a beautiful lady next to the man who showed him that the boys had disappeared and instead he was surrounded by different wild animals that turned into gentle sheep. John asked her to explain all this and she promised that in due time she would. At that point he woke up.

The next morning he told the dream to his family. His brothers laughed. One of them gave this interpretation: "You are going to become a shepherd and take care of goats, sheep, and livestock." Another said, "You might become the leader of a gang of robbers." His mother said, "Who knows? Maybe you will become a priest." His grandmother, whom he described as "very religious" and "illiterate," offered the last word on this dream: "You must not pay attention to dreams."

St. John wrote that he felt the same way but the dream stayed with him and years later, in 1858, when he met with Blessed Pius IX to talk about founding the Salesian congregation the pope asked him to write the dream down.

Today people often wonder about the nature and value of dreams. Most of us will probably not experience mystical dreams as St. John Bosco did, but it may be helpful for us to give them some attention.

First, dreams seem to be the way that our minds process and deal with the events of our day as they affect our emotional lives. Thus, people who are stressed out during the day will commonly have anxiety dreams. God can use such dreams to get our attention and reflecting on them can help us deal in a healthy way with the stress.

Second, it's a good idea offer our sleep to God and to pray for good dreams. We can pray as we lay in bed that the Holy Spirit will come upon us and bless our dreams so that they help us and give glory to God. As Psalm 127: 2 says: "for he gives to his beloved in sleep."
Posted by Fr. James Kubicki, S.J. at 1:45 PM