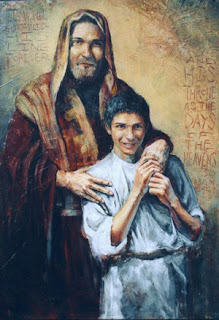 This is one of my favorite pictures of St. Joseph. The artist is Christopher Santer and some of his works, including 75 drawings of various saints, can be found at Pacem Studio. I've used this painting on retreats when I talk about the Hidden Life of Jesus and His relationship with St. Joseph. Very often retreatants look at this image and feel deep sadness and pain because they didn't have the warm relationship with their fathers that is depicted here. Their fathers worked hard to support the family but were both physically and emotionally absent from them. Or else they say that the obvious pride on the face of Joseph is just the opposite of what they experienced from their fathers whom they never seemed able to please. In these situations I tell people that they can turn to St. Joseph for healing. He was the foster-father of Jesus and he can be our foster-father as well. We can turn to him and ask him to fill the emptiness left by an absent father and foster the healing of the pain of a difficult childhood.

St. Joseph is certainly one of our most popular saints. We talked about him on Relevant Radio's Inner Life show today and asked people to call in with their stories about how St. Joseph had helped them or their families. There were calls throughout the one hour show and even the following Facebook post that was written before the show:

"Wish I could tune in! My family has claimed St. Joseph as our patron saint ever since we were drawn to him when my husband lost his job a few years ago. St. Joseph helped to ease our anxieties and showed us how to trust in God in all things, just like he was told by the angel to not leave Mary's side after he found out she would have a baby. Sometimes you just have to let go of the reins and put all your trust in God! Not "sometimes." All the time. After we began daily prayers to St. Joseph, it was only a few weeks before the interviews started pouring in, and two months later my husband started his new job! Praise God and thank you St. Joseph for your mighty intercession."

In preparing for the show and celebrating St. Joseph's feast today, I learned that Blessed Pope John XXIII, the same pope who in 1962 inserted the name of St. Joseph into Eucharist Prayer I, the Roman Canon, chose St. Joseph to be the protector of the Second Vatican Council in an apostolic letter he wrote on March 19, 1961.

St. Joseph is known as the "just man" and the "man of faith." I can't help thinking that Pope Benedict, whose baptismal name is "Joseph," will ask his patron saint to play a special role in the upcoming Year of Faith which will begin on October 11, the 50th anniversary of the start of the Second Vatican Council.

I enjoy "word play" and so was interested to see Pope Benedict engage in it in a homily he gave during the Vespers celebration for the feast of St. Joseph when he visited Africa in 2009. He said: "In Joseph, faith is not separated from action. His faith had a decisive effect on his actions. Paradoxically, it was by acting, by carrying out his responsibilities, that he stepped aside and left God free to act, placing no obstacles in his way. Joseph is a 'just man' (Mt 1: 19) because his existence is 'ad-justed' to the word of God."

May St. Joseph help us all "ad-just" to the word of God so that we may become truly just and righteous people!
Posted by Fr. James Kubicki, S.J. at 4:10 PM