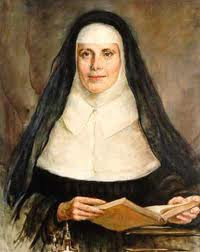 Since last Tuesday I've been in Alma, Michigan where I began a retreat for some of the Religious Sisters of Mercy of Alma-- 2 novices about to make their first profession, 9 Sisters in temporary vows, and 2 perpetually professed Sisters.  It has been a retreat for me as well because I've participated in their celebration of the Liturgy of the Hours, their daily Holy Hour, and the Holy Sacrifice of the Mass.  I've also enjoyed getting to know a bit about their foundress, Mother Catherine McAuley, whom Blessed John Paul II declared "Venerable" in 1990, the first step toward her beatification.

Catherine McAuley was born in Ireland in 1778 and died in 1841.  In 1827 she used an inheritance to open a home for poor girls, the first "Home of Mercy."  The archbishop encouraged her to start a religious congregation to continue this good work and in 1831 the Sisters of Mercy began.  In contrast to the cloistered contemplative nuns with whom most people were familiar, they came to be known as "the walking sisters" because they went through the streets helping the poor and sick.  Today, in addition to the three vows of poverty, chastity, and obedience, they take a fourth vow of service to the poor, sick, and ignorant.

St. Ignatius, the founder of my religious order, the Jesuits, wrote a prayer of offering ("Suscipe") at the end of his "Spiritual Exercises."  When one comes to know the love of God and the gift of Himself that He makes in Jesus and the Eucharist, one wants to return love for love by making of gift of oneself.  I was delighted that Venerable Catherine McAuley also wrote an offering prayer which the Sisters pray together every day after Mass.  Here is Mother Catherine's "Suscipe:"

My God, I am Thine for time and eternity.
Teach me to cast myself entirely
Into the arms of Thy loving Providence
With the most lively, unlimited confidence
In Thy compassionate, tender pity.
Grant me, O most Merciful Redeemer,
That whatever Thou dost ordain or permit
May be acceptable to me.
Take from my heart all painful anxiety,
Suffer nothing to sadden me but sin,
Nothing to delight me but the hope of
coming to the possession of Thee,
My God and my all,
In Thine everlasting kingdom.
Amen.