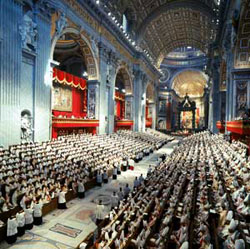 Today is the 50th anniversary of the beginning of the Second Vatican Council.  Pope Benedict XVI chose this anniversary as the day on which the Year of Faith would begin.  In his letter announcing the Year of Faith, the Holy Father spoke of these themes:  "a profound crisis of faith" in the world; the necessity of the "profession of the truth faith and its correct interpretation;" "authentic and renewed conversion to the Lord;" and the need "to rediscover the joy of believing and the enthusiasm for communicating the faith."  It's no accident that Pope Benedict chose this date for the beginning of the Year of Faith because those are themes that appeared in Blessed Pope John XXIII's address at the opening of the Council on October 11, 1962.  Here are some brief excerpts from that address which are as timely today as they were 50 years ago.

"And now the Church must once more reaffirm that teaching authority of hers which never fails, but will endure until the end of time.  For that was Our reason for calling this most authoritative assembly...."

"The major interest of the Ecumenical Council is this: that the sacred heritage of Christian truth be safeguarded and expounded with greater efficacy.  That doctrine embraces the whole man, body and soul. It bids us live as pilgrims here on earth as we journey onwards towards our heavenly homeland. It demonstrates how we must conduct this mortal life of ours.  If we are to achieve God's purpose in our regard we have a twofold obligation: as citizens of earth, and as citizens of heaven.  That is to say, all men without exception, both individually and in society, have a life-long obligation to strive after heavenly values through the right use of things of this earth.  These temporal good must be used in such a way as not to jeopardize eternal happiness."

"And our duty is not just to guard this treasure [of the truth of the Church's doctrine], as though it were some museum-piece and we the curators, but earnestly and fearlessly to dedicate ourselves to the work that needs to be done in this modern age of ours, pursuing the path which the Church has followed for almost twenty centuries."

"Certain it is that the critical issues, the thorny problems that wait upon men's solution, have remained the same for almost twenty centuries. And why? Because the whole of history and of life hinges on the person of Jesus Christ. Either men anchor themselves on Him and His Church, and thus enjoy the blessings of light and joy, right order and peace; or they live their lives apart from Him; many positively oppose Him, and deliberately exclude themselves from the Church. The result can only be confusion in their lives, bitterness in their relations with one another, and the savage threat of war."

"What is needed at the present time is a new enthusiasm, a new joy and serenity of mind in the unreserved acceptance by all of the entire Christian faith, without forfeiting that accuracy and precision in its presentation which characterized the proceedings of the Council of Trent and the First Vatican Council. What is needed, and what everyone imbued with a truly Christian, Catholic and apostolic spirit craves today, is that this doctrine shall be more widely known, more deeply understood, and more penetrating in its effects on men's moral lives. What is needed is that this certain and immutable doctrine, to which the faithful owe obedience, be studied afresh and reformulated in contemporary terms. For this deposit of faith, or truths which are contained in our time-honored teaching is one thing; the manner in which these truths are set forth (with their meaning preserved intact) is something else."


In these words of Blessed John XXIII there are clear echoes of what has come to be known as the "New Evangelization."  Christ is not new.  The contents of the faith are not new.  What is new is the enthusiasm with which the faithful ought to believe and to share their faith.  What is new is the method with which the Church communicates its knowledge to a world in desperate need of the faith that leads to love of God and neighbor.  May this anniversary and the Year of Faith inspire us all!