The Name, the Heart, and the Blood

This month’s First Friday falls on the feast of the Most Holy Name of Jesus.  In 1969 this feast was 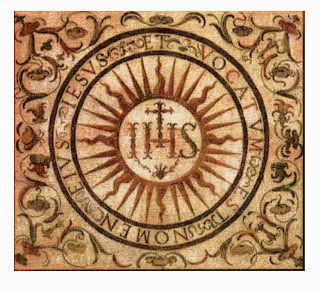 removed from the liturgical calendar but was restored in 2002.

A name represents that person, his or her identity.  According to Matthew 1:21, Joseph was directed by an angel to call Mary’s son “Jesus,” a name that means “God saves.” This is Jesus’ identity. He is the Savior of the world. As such His Name is “above every name” and is the name at which “every knee should bend” (Philippians 2:9-10). Moreover, according to a speech that St. Peter gave in front of the Sanhedrin, “There is no salvation through anyone else, nor is there any other name under heaven given to the human race by which we are to be saved” (Acts: 4:12).  The Name of Jesus says it all and is all-powerful. It’s a prayer in itself.

As Jesus can be represented by His Name, so He is also represented by His Heart. The heart is the center of person, that person’s deepest interior or identity. Thus devotion to the Name of Jesus goes with devotion to the Sacred Heart of Jesus. Jesus fulfilled the Name given to Him when He suffered and died on the cross, when His Heart was pierced so that Blood and Water, the sacramental life of the Church, would flow forth and save the world.


Devotion to Jesus’ Name and Heart includes devotion to His Precious Blood. These three go together: the Name, the Heart, and the Blood. In fact, Blessed, soon-to-be Saint, John XXIII wrote about this in a June 30, 1960 letter entitled “On Promoting Devotion to the Most Precious Blood of our Lord Jesus Christ.” He wrote:

“We judge it most timely to call our beloved children's attention to the unbreakable bond which must exist between the devotions to the Most Holy Name and Most Sacred Heart of Jesus -- already so widespread among Christians -- and devotion to the incarnate Word's Most Precious Blood, ‘shed for many, to the remission of sins.’
“Suffice it to recall the spiritual favors that our predecessors from the sixteenth century on have attached to practicing devotion to the Most Holy Name of Jesus, which in the previous century St. Bernardine of Siena untiringly spread throughout Italy. No less striking are the benefits the popes have attached to practicing devotion to the Most Sacred Heart of Jesus, whose rise and spread owe so much to the revelations of the Sacred Heart to St. Margaret Mary Alacoque. So highly have all the popes regarded this devotion that again and again in their official acts they have expounded its nature, defended its validity, promoted its practice.

“Likewise the devotion to the Most Precious Blood, which owes its marvelous diffusion to the 19th-century Roman priest, St. Gaspar del Bufalo, has rightly merited the approval and backing of this Apostolic See.

“Amid today's most serious and pressing spiritual needs, may this latest exercise of that ‘care for all the churches’ proper to our sovereign office awaken in Christian hearts a firm conviction about the supreme abiding effectiveness of these three devotions.”

Jesus—the Name, the Heart, and the Blood that flowed from it to save the world—all represent the Person. May the Name of Jesus be reverenced and honored at all times and places world without end. Amen.