St. Joan of Arc and St. Therese of Lisieux

It’s the feast of St. Joan of Arc who was burned at the stake on this day in 1431 when she was 19 years old.  She was a favorite saint of St. Therese of Lisieux who is one of the patron saints of the Apostleship of Prayer in which she enrolled when she was 12.

In a letter to a missionary priest, St. Therese wrote : “In my childhood, I dreamed of combating in the battlefield. When I began to learn the history of France, I was enchanted with the deeds of Joan of Arc; I felt in my heart a desire and courage to imitate them.” 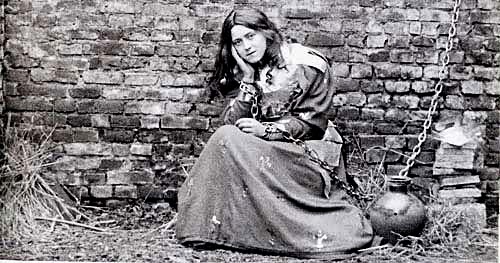 On January 21, 1894, Therese played the leading role in a play she had written about St. Joan of Arc. Her sister Celine photographed her posing as the saint in prison.  Then, just six days later, Pope Leo XIII officially opened the cause for Joan’s beatification.  In May of that year, Therese wrote a poem entitled “Canticle to Obtain the Canonization of the Venerable Joan of Arc.”  It contains these lines:


7. It is not Joan's victories
We wish to celebrate this day.
My God, we know her true glories
Are her virtues, her love.

8. By fighting, Joan saved France.
But her great virtues
Had to be marked with the seal of suffering,
With the divine seal of Jesus her Spouse!

10. Joan, you are our only hope.
From high in the Heavens, deign to hear our voices.
Come down to us, come convert France.
Come save her a second time.

12. Sweet martyr, our monasteries are yours.
You know well that virgins are your sisters,
And like you the object of their prayers
Is to see God reign in every heart.

4 Refrain
To save souls
Is their desire.
Ah! Give them your fire
Of apostle and martyr!

In April, 1897 St. Therese’s tuberculosis had progressed to the point that she became seriously ill and in July she was moved from her room to the community’s infirmary. In May she wrote the poem “To Joan of Arc” in which she speaks of the value of suffering:

When the Lord God of hosts gave you the victory,
You drove out the foreigner and had the king crowned.
Joan, your name became renowned in history.
Our greatest conquerors paled before you.

But that was only a fleeting glory.
Your name needed a Saint's halo.
So the Beloved offered you His bitter cup,
And, like Him, you were spurned by men.

At the bottom of a black dungeon, laden with heavy chains,
The cruel foreigner filled you with grief.
Not one of your friends took part in your pain.
Not one came forward to wipe your tears.

Joan, in your dark prison you seem to me
More radiant, more beautiful than at your King's coronation.
This heavenly reflection of eternal glory,
Who then brought it upon you? It was betrayal.

Ah! If the God of love in this valley of tears
Had not come to seek betrayal and death,
Suffering would hold no attraction for us.
Now we love it; it is our treasure.


Because Jesus suffered and then entered into glory, those who suffer can be configured more closely to him. Their sufferings, united to the Cross, can be a powerful prayerful offering that helps in the ongoing work of the salvation of souls so that they will, as St. Therese wrote, “see God reign in every heart.”
Posted by Fr. James Kubicki, S.J. at 1:45 PM