I celebrated Mass this morning for the 600 students and faculty of St. Anthony's High School in Milwaukee.  I found it a good opportunity to preach about a very special woman and to encourage the young people to see themselves as loved and chosen by God. 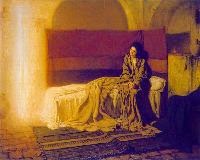 We honor Mary today because she said "yes" to God.  No Mary, no Jesus.  It's as simple as that.  In order for the Second Person of the Blessed Trinity to become human, a very special woman was called to be his mother.  This is why we honor Mary.  It was God's plan to save the world through her.  Through her the Son of God took flesh, lived our life, suffered and died and rose from the dead. All to save humanity.  This was Mary's glorious destiny--to be the Mother of God.  This is why we use the words of Luke's Gospel every time we pray the "Hail Mary."

When Mary told the angel Gabriel, "Behold, I am the handmaid of the Lord. May it be done to me according to your word," Jesus was conceived in her womb through the power of the Holy Spirit.  With Mary's "yes" to God, Jesus was conceived and began to develop cell by cell.  Within three weeks the first physical organ of God-in-the-flesh appeared--his heart.

St. John Paul II once said that "each person is unique, precious, and unrepeatable."  There never was another you. Among the billions of people today there isn't another you nor will there ever be.  You are precious to God.  You give God a love and a joy that no other human being can give God because of who you are.

Shortly after he was elected, Pope Benedict XVI said: "We are not some casual and meaningless product of evolution. Each of us is the result of a thought of God."  And God didn't just think of you some nine months and a couple hours before you were conceived. Since the thoughts of God are eternal, God had you in mind from all eternity.

Pope Benedict continued: "Each of us is willed."  God wanted you to exist.  Sometimes people tell me, "I'm an accident.  I'm a mistake.  My parents didn't plan on having me. In fact, they were pregnant with me before they got married and the only reason they got married is because they were pregnant with me.  They shouldn't have gotten married because it didn't work out and they were miserable together. I'm not only a mistake, I'm a bad mistake who made life miserable for my parents."  No, no one is a mistake or an accident in God's eyes.  Because God was present instilling an immortal soul, the principle of life for human beings, God willed or intended that person's conception. No matter what the circumstances of one's conception, God was present willing that person into existence.

"Each of us is loved," the pope went on to say.  Our experience of human love is finite, conditional. We put limits on our love and we tend to think of God's love that way.  But God is infinite and loves you as though you were the only person in the world. St. Francis de Sales once used the example of the sun which shines on the individual flowers of a garden.  Shining on one doesn't mean there is less sunshine for the others.  The sun shines on each flower as though it were the only flower in the garden. If that's true for a creature, the sun, then it is even more true for the Creator of the sun, God, who shines with his love on all the human flowers in the world with equal intensity.

And Pope Benedict said, "each of us is necessary."  You are essential to God's plan just the way Mary was.  Ask yourself, "What is God's plan, God's desire for me?  How is God calling me to bring his love come into the world?"

Shortly after his election Pope Francis said, "For God, we are not numbers, we are important, indeed we are the most important thing to him.... We are what is closest to his heart."

You are so important, that God took flesh, as we celebrate today.  Moreover, in order to save you, that flesh was nailed to a cross and died, as we will celebrate on Good Friday.  But that flesh rose never to die again, as we will celebrate on Easter.  It was all made possible by that special woman, Mary.  As we honor her today, let's thank God for our life and make an offering, asking that God's will may be done in our life as well.
Posted by Fr. James Kubicki, S.J. at 2:02 PM