The Importance of Fatima

Today is the feast of Our Lady of Fatima.  We remember how on May 13, 1917, the Blessed Virgin Mary appeared to three shepherd children--Lucia, Francisco, and Jacinta--and gave them an important message for the world. It wasn't a new message but as old as the Gospel where we read in Mark that the first recorded words of Jesus after his baptism and the temptations in the desert were: "This is the time of fulfillment. The kingdom of God is at hand. Repent, and believe in the gospel" (1: 15).

On May 13, 1982,  one year after the attempt on his life, St. John Paul II visited Fatima and offered the Blessed Mother the bullet that had struck him and which he was convinced did not kill him because her finger guided it away from doing mortal harm. (I wrote here about this bullet which was affixed to the crown that is placed on the statue of Our Lady on special occasions.) 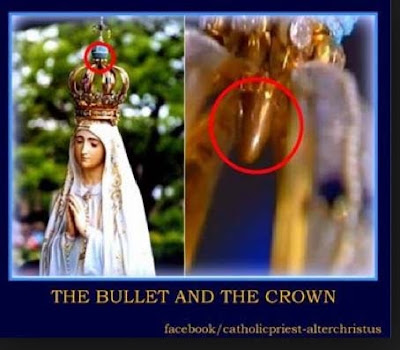 "These are the first words of the Messiah addressed to humanity. The message of Fatima is, in its basic nucleus, a call to conversion and repentance, as in the Gospel. This call was uttered at the beginning of the twentieth century, and it was addressed particularly to this present century.  ... The call to repentance is a motherly one, and at the same time it is strong and decisive."

The call of  Jesus and Our Lady of Fatima has not lost its urgency.

On the anniversary of the last Fatima apparition, October 13, 2013, during the Marian Day of the Year of Faith, Pope Francis entrusted the world to Our Lady of Fatima with these words:

Blessed Virgin Mary of Fatima,
with renewed gratitude for your motherly presence
we join in the voice of all generations that call you blessed.

We celebrate in you the great works of God,
who never tires of lowering himself in mercy over humanity,
afflicted by evil and wounded by sin,
to heal and to save it.

Accept with the benevolence of a Mother
this act of entrustment that we make in faith today,
before this your image, beloved to us.

We are certain that each one of us is precious in your eyes
and that nothing in our hearts has estranged you.

May we allow your sweet gaze
to reach us and the perpetual warmth of your smile.

Guard our life with your embrace:
bless and strengthen every desire for good;
give new life and nourishment to faith;
sustain and enlighten hope;
awaken and animate charity;
guide us all on the path to holiness.

Teach us your own special love for the little and the poor,
for the excluded and the suffering,
for sinners and the wounded of heart:
gather all people under your protection
and give us all to your beloved Son, our Lord Jesus.
Amen.


In two years, Pope Francis hopes to go to Fatima for the centenary of the apparitions.

Clearly Our Lady of Fatima important to Pope Francis.  Her message is as important as ever. Sister Lucia, who lived for almost eighty-eight years after Mary appeared to her, wrote in a book published in 2000 ("Calls" from the Message of Fatima):

"We all desire and long for peaceful days, to be able to live in peace. But this peace will not be achieved until we use the Law of God as the norm and guide of our steps. Now the entire Message of Fatima is a call to pay attention to this divine Law. ...

"God does not wish sinners to perish but rather that they be converted and live. This is the reason why Our Lady urged us so insistently to pray and make sacrifices for the conversion of sinners: Pray, pray very much, and make sacrifices for sinners. Many souls go to hell because there is none to make sacrifices and to pray for them (Fatima, 19th August, 1917). Hence, by our union with Christ and with his Church, we must offer ourselves as victims of expiation and petition for the conversion of our brothers and sisters. Herein lies the essence of our charity: to love those who perhaps do harm to us, contradict or persecute us. Our forgiveness, offered to them in the light of faith, hope and charity, will draw them back into the arms of God."