I celebrated Mass today with the Apostleship of Prayer staff.  I wore white instead of green, the color most people going to Mass today would have seen.  Today is what is known as a "ferial day" on which there is no feast, obligatory memorial, or optional memorial.  The presider is free to choose any saint from the calendar or a votive Mass of one king or another.

I could have worn white to celebrate St. 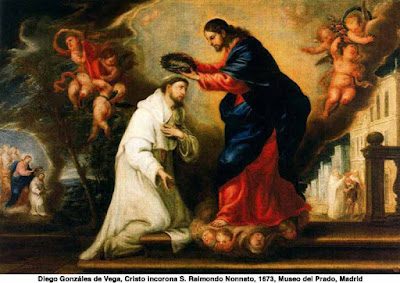 Raymond Nonnatus.  "Nonnatus" is Latin for "not born" and this name was given to Raymond because he came into the world in 1204 via cesarean section after his mother died during labor.  In time Raymond joined the recently founded Mercedarian order, a religious congregation whose mission was to ransom Christian slaves and going so far as to take their place until the ransom could be paid.  This is what Raymond did and while he was in prison he preached the Gospel so convincingly that some of his Muslim captors became Christian.  This so infuriated the governor that, according to tradition, he had a red-hot spike driven through Raymond's lips and a padlock inserted to prevent his preaching.  Eventually Raymond was ransomed, returned to Europe, and was made a cardinal adviser to the pope who had heard about his courageous witness.  He died on this day in 1240.

I could have celebrated Mass in his honor, but instead I chose white as I celebrated a Mass in honor of the Angels.  When Monday is a ferial day, I like to remember the Angels who, from time to time, have certainly remembered me.  The latest such incident occurred a week ago. 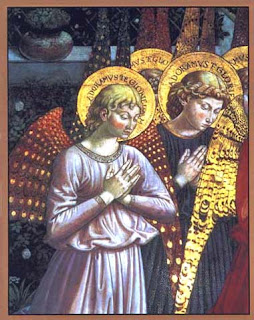 I was in the St. Louis airport on my way back to Milwaukee after a retreat for 78 men at White House Jesuit Retreat Center.  I had plenty of time to catch my 8:25 flight to Milwaukee but had misread the gate information.  Settling myself down to wait at Gate E4, I checked email and then began reading a book when suddenly, I heard a name over the loud speaker.  It sounded vaguely familiar and it was repeated a second time announcing the immediate departure of his flight for Milwaukee at Gate E20.  Sometimes people have trouble pronouncing my last name ("Kubicki," which I don't think is that difficult) and such was the case this time.  Realizing I was at the wrong gate, I got up and raced through the terminal, arriving at the correct gate just in time to board my plane before the doors closed.

I'm convinced that my Guardian Angel opened my ears to hear my mispronounced name being paged and then gave my legs some extra wings as I raced through the terminal.

And that is one of the many reasons why I like to honor the Angels in a votive Mass from time to time.
Posted by Fr. James Kubicki, S.J. at 1:25 PM