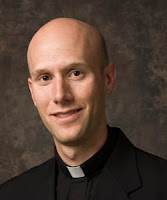 Last Saturday I participated in the ordination of Jesuit Fr. Vincent Strand.  It was a happy and special time for me because I had been his spiritual director when he was discerning his vocation as a student at Marquette University.  From those days to the present he has been a strong member of the Apostleship of Prayer.  Here's something he wrote when he was a Jesuit novice, In it he wrote about how making a daily offering led to him offering every day of his life as a Jesuit priest:

"I remember well my first encounter with the Apostleship of Prayer.  I was a freshman at and accustomed to attending daily mass in the basement chapel of .  Each day while en route to my pew, I would pass a table filled with popular devotional materials: endless holy cards and novenas, gaudy plastic rosaries, green and brown scapulars, and there too, the AOP leaflets with the Holy Father’s monthly intentions.  Assuming that the AOP was one more dusty devotional practice that perhaps had a place in the 50´s Catholicism of my grandparents, but certainly had no relevance for a third-millennium college student, for months I passed these leaflets without a second thought.  One day, however, perhaps simply out of curiosity, I picked up a leaflet and perused its contents, expecting to find one more antiquated novena to some obscure saint.  I was shocked by what I found.  For here was a list of intentions that was anything but outdated, a list of intentions which reflected my deepest hopes for the world, a list of intentions which was as broad and diverse as the whole of the Church’s mission.

"Yet something else in that small leaflet struck me as well, a small prayer that would forever change my spiritual life: the daily Morning Offering.  Father General Peter Hans Kolvenbach once wrote of the Morning Offering: “Experience shows that this act, both simple and profound, changes one's life.”  It did so for me.  As I began daily offering my life to Jesus, the question started to loom: If you give each day to him, why not your whole life?  Soon I was discerning a religious vocation.

"The fact that the Society of Jesus has been entrusted by Christ himself with the responsibility of propagating the devotion to his Heart—a responsibility institutionalized by the AOP—played a significant role in my decision to apply to the Society of Jesus.  During my years of discernment, I thought seriously about a number of options: Married laymen? Dominican? Carmelite? Diocesan priest?  Amidst this sometimes confusing cloud of options, my spiritual director continually asked me: What is your deepest, truest desire?  As I grew more and more aware of God’s great love for me, suddenly my vocation seemed simple: to bring the love of Jesus to the world.  For me, the love of Jesus was symbolized by the love of his Heart.  I felt Christ calling me to share the love of his Heart, to be an apostle of his Heart.  This, it seemed to me, was at the core of what it means to be a Jesuit.  I knew it was to the Society of Jesus that God was calling me.

"The importance of devotion to the Sacred Heart of Jesus and the AOP has only grown during my time in the Society.  Intriguingly, I have observed the same phenomenon in the lives of many other young Jesuits.  Perhaps this was most evident for me in the days of sharing which followed the long retreat in my novitiate last year, when a number of men who previously had no formal contact with devotion to the Sacred Heart spoke of the importance of the symbol of Jesus´ Heart for them during the Spiritual Exercises.  Suddenly, they too were convinced of the need to spread this devotion—this message of love—to all the world.

"I am convinced that the AOP has an indispensable part to play in the future of the Catholic Church in .  The innate spirituality of the AOP provides an answer to many trends of the contemporary world.  In an age when young Catholics desire something radical, something heroic, something whole, the spirituality of the Morning Offering requires a complete gift of self.  In a time when the faithful, especially youth, have a growing love of the Eucharist, the AOP offers a spirituality which is intrinsically Eucharistic.  In a Church which has finally come to a clearer understanding of the universal call to holiness, the AOP provides an avenue for the sanctification of one’s life in the midst of the world.  In an age when globalization continues to shrink the world and makes us aware that we are truly neighbors and in solidarity with the whole human family, the AOP places us in a fraternity of prayer with men and women in every corner of the globe, praying for intentions which are universal in scope.  In a world marked by a great yearning for peace and justice, the AOP provides us with intentions focused on the most pressing needs of social justice throughout the world.  In an age of increased secularization which has resulted in a fervor for a new evangelization, the AOP fosters a missionary spirit among its members.

"Perhaps these are some of the reasons why there is a renewed interest in the AOP among so many young Jesuits.  But, in truth, I think there is a deeper and simpler reason, a reason which has been articulated time and time again by Jesuit spiritual writers, by countless Father Generals, and recently by men such as Pedro Arrupe and Karl Rahner: devotion to Christ’s Heart is something essential to the Society of Jesus.  Thus as something essential, as long as there are Jesuits, there will be a zeal for spreading the message of love of the Sacred Heart.

"While for a time it may have appeared to be on the wane, interest in the Sacred Heart among Jesuits is not disappearing.  No, to the contrary, it appears to be growing.  In one of his last and most famous letters to the Society, “Rooted and Grounded in Love,” Pedro Arrupe stated:  “I am convinced that there could be few proofs of the spiritual renewal of the Society so clear as a widespread and vigorous devotion to the Heart of Jesus.”  I pray that this saint’s words were prophetic and that interest in the Sacred Heart among young Jesuits is indicative of a greater spiritual renewal in the Society of Jesus.  For as always, the world is in great need of knowing the love of Christ’s Heart.  May Jesuits always be at the forefront of spreading this love to the whole world."