The Power of Prayer

Is God all-powerful?  When he walked this earth was Jesus God?  Was Jesus all-powerful?  Most Christians would answer “yes” to these questions, and yet we have a scene in the Gospels where Jesus appears to have limited power.

Mark 6: 1-6 tells of Jesus’ return to his hometown of Nazareth where he is rejected.  The neighbors take “offense” at Jesus because he is too familiar to them.  He can’t be a prophet or a wonder-worker.  “Is he not the carpenter?”  As a result, “he was not able to perform any mighty deed there, apart from curing a few sick people by laying his hands on them.  He was amazed at their lack of faith.”

It seems that Jesus’ power was limited by people’s lack of faith.  This makes sense.  God created humanity so that we—God and us—would work together tending the earth and caring for God’s human family. Being all-powerful, God could have done everything by himself.  But love involves sharing and so God created humanity to share in the work.  Children experience the love of their parents when they are invited to help them in the work that adults do.  They feel special and included.  And so it is with God.

Mary—whom the poet William Wordsworth called “our tainted nature’s solitary boast”—is the model for humanity.  She cooperated completely with God’s grace and became the “Mediatrix of Grace,” the means by which the Second Person of the Blessed Trinity became human.  She was a perfect channel for God’s grace to flow into the world.

When he met with Polish Bishops recently, Pope Francis told them: “We can all have an open heart and think of spending one hour in the parishes, an hour a week, of adoration and prayer. Prayer moves mountains!”  Open hearts, like the Immaculate Heart of Mary, allow the power that created the universe to enter the world.

The message that Mary gave to three children in Portugal in 1917 was “prayer and penance.”  Mary said that if people prayed, especially a daily Rosary, and offered sacrificial actions like fasting, a greater war than the one that was currently going on could be avoided.  People did not listen and the world endured a second “world war.”

But many people did listen. They prayed and did penance.  In 1989 something happened that those of us who grew up in the 1950’s and ‘60’s never expected.  The Berlin Wall came down. A large portion of it is now on display at Our Lady’s shrine in Fatima.  Then, two years later, the Soviet Union broke up as the Communists lost power.

But before that, as though to prepare the stage for what many thought was unthinkable—the end of the Soviet Union—prayer wrought another miracle.  On May 13, 1981 Pope John Paul II was shot in St. Peter’s Square.  By all accounts he should have died.  He didn’t and afterwards he attributed his survival to Our Blessed Mother.  He said that while one finger pulled the trigger, another finger guided the bullet millimeters away from certain death.  That bullet now rests in a crown used to honor Our Lady of Fatima.  In the millennial year 2000, Joseph Cardinal Ratzinger wrote: “That here ‘a mother’s hand’ had deflected the fateful bullet only shows once more that there is no immutable destiny, that faith and prayer are forces which can influence history and that in the end prayer is more powerful than bullets and faith more powerful than armies.”

Perhaps an even greater example of the power of faith-filled prayer is a little known story within a larger event that occurred seventy-one years ago today.  On this day in 1945, the first atomic bomb was dropped on Hiroshima, Japan.  Eight blocks from where the bomb went off was the Church of Our Lady’s Assumption. Next door was the rectory where eight Jesuit missionaries resided.  One of them was Fr. Pedro Arrupe who later served as the General of the Jesuits from 1965 to 1983. Another was Fr. Hubert Schiffer who had just finished celebrating Mass and was sitting down to breakfast when the blast occurred. He wrote: “Suddenly, a terrific explosion filled the air with one bursting thunder stroke. An invisible force lifted me from the chair, hurled me through the air, shook me, battered me, whirled me ‘round and round’ like a leaf in a gust of autumn wind.”

All around there was devastation, but, while damaged, the church and rectory stood and became a makeshift hospital for those who survived the blast. Dr. Stephen Rinehart who worked for the U.S. Department of Defense testified: 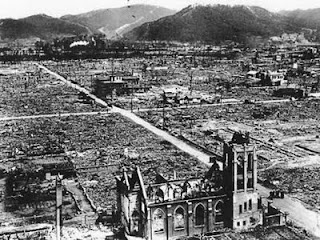 No way any human could have survived nor should anything have been standing at 1 kilometer.  I think there were a few badly burned survivors at ten to fifteen kilometers (all—except the Jesuits—died within fifteen years of some form of cancer). There are no physical laws to explain why the Jesuits were untouched in the Hiroshima air blast. There is no other actual or test data where a structure such as this was not totally destroyed at this standoff distance by an atomic weapon. All who were at this range from the epicenter should have received enough radiation to be dead within at most a matter of minutes if nothing else happened to them.  There is no known way to design a uranium-235 atomic    bomb, which could leave such a large discrete area intact while destroying everything around it immediately outside the fireball (by shaping the plasma). From a scientific viewpoint, what happened to those Jesuits at Hiroshima still defies all human logic from the laws of physics as understood today (or at any time in the future). It must be concluded that some other (external) force was present whose power and/or capability to transform energy and matter as it relates to humans is beyond current comprehension.

Fr. Schiffer, who died in 1982, said: “We believe that we survived because we were living the Message of Fatima. We lived and prayed the Rosary daily in that home.”

The ways of God are mysterious.  The Rosary is not magic.  Somehow God wanted to give a sign of the power of faith-filled prayer and the special protection of Mother Mary, Our Lady of Fatima.

The question is: do I take faith and prayer seriously?  Events in our lives, in our nation, and in our world test our faith.  It’s easy to get discouraged and give up.  But if prayer can move bullets, bring down the Berlin Wall, and protect eight Jesuits from the atomic bomb, shouldn’t I trust in its power to continue to work wonders?
Posted by Fr. James Kubicki, S.J. at 4:26 PM