The first reading from Sunday’s Mass (Twenty-Seventh Sunday in Ordinary Time, Cycle C) is from the Prophet Habakkuk. As you read the words with which it begins, what scene comes to mind?

“How long, O LORD? I cry for help but you do not listen! I cry out to you, “Violence!” but you do not intervene. Why do you let me see ruin; why must I look at misery? Destruction and violence are before me; there is strife, and clamorous discord.”

What comes to my mind is Aleppo, Syria.  If you watch the news or read the paper with any compassion a prayer must well up: “How long, O Lord?  Why?”  We want God to intervene in this hopeless situation of the Syrian civil war.

But God will not intervene except through us.  God won’t force his plan or his will on humanity. God won’t take human freedom away.

God wants human cooperation to fulfill his plan.  When Jesus walked this earth his hands were tied by people’s lack of faith.  According to Matthew 13: 58, when Jesus returned to his native town of Nazareth, “he did not work many mighty deeds there because of their lack of faith.”

The reading from Habakkuk ends with a vision of justice and peace.  Through the prophet God tells us to be patient and to have faith.

In the Gospel (Luke 17: 5-10), the apostles ask Jesus: “Increase our faith.”  Jesus responds with an image of impossibility—that faith the size of a small seed can uproot a tree and send it into the sea.  Isn’t peace just as or more impossible?  But faith and prayer can do the impossible. God and the human person working together can bring about miracles no less impossible as the displacement of trees.

One such miracle was the survival of several Jesuits who were in Hiroshima at ground zero when the first atomic bomb was dropped.  (See my blog post of August 6, 2016.)  Not only did they survive the initial blast but subsequently none of them experienced the effects of radiation.  How was this possible?  Fr. Hubert Schiffer, S.J. said it was because they prayed the rosary and lived the message of Fatima. 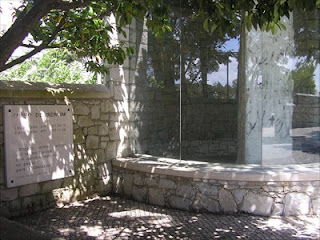 If you go to Fatima today you will see the results of another miracle.  There is a large piece of the Berlin Wall on display.  Why?  It tells us that faith-filled prayer brought down that wall and the Communism in Eastern Europe and the Soviet Union that it represented.  Faith and prayer can bring down walls and change governments.  It can transform hardened hearts.

But in the second part of the Gospel Jesus tells us that something else needs to accompany faith.  Perhaps it is an essential ingredient of real faith.  Humility.  Humility recognizes one’s true condition.  We are not masters of ourselves but servants of God.  We cannot trust in ourselves but only in God.  Humility is a foundational virtue because all the others—even charity, which St. Paul called the greatest (1 Corinthians 13: 13)—can become a source of pride that ultimately leads us to think that we are all-powerful and in control.

Jesus shows us the way of humility, “taking the form of a slave” (Philippians 2: 7), bending down and washing feet (John 13: 1-16), and offering himself on a cross for our salvation.  His focus is not on himself but on God the Father and God’s other human children.  In the Eucharist he continues to humble himself, making present his life-saving death and resurrection and then giving himself to us under the humble appearances of bread and wine.  In the Eucharist he invites us to sit and dine while he serves us!

The vision of peace is possible but its realization requires faith-filled prayer.  The greatest prayer is the Eucharist where Jesus gives himself to us to transform us.  Here we receive the Body and Blood, soul and divinity, including the Sacred Heart, to tear down the walls that separate us and to transform our hearts.
Posted by Fr. James Kubicki, S.J. at 11:35 AM