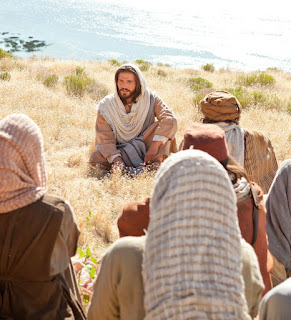 What was Jesus’ reaction when he saw the crowds that followed and gathered around him?  According to Matthew 9: 36, “at the sight of the crowds, his heart was moved with pity for them because they were troubled and abandoned, like sheep without a shepherd.”  We have to imagine that Jesus had the same reaction before he preached the Sermon on the Mount (Matthew 5: 1-12a): “When he saw the crowds, he went up the mountain, and after he had sat down, his disciples came to him.  He began to teach them….”   He teaches them the Beatitudes.  Jesus, whose heart is moved by the sight of the crowds, teaches his followers the secret of true happiness.

Pope Francis called the Beatitudes the “guide for the journey that leads us to the Kingdom of God” (see his daily meditation for June 6, 2016).  They are “the ticket, the guide sheet for our life so as to avoid getting lost and losing ourselves.”  Another translation of the word “blessed,” which introduces each of the Beatitudes, is “happy.”  They are the “guide” and “ticket” to happiness, to the ultimate joy of heaven.

The Beatitudes are counter-cultural.  The world has a very different plan for happiness and it leads to the opposite, to the loss of self.  The world says you will find yourself and find happiness by making a name for yourself, rather than being “poor in spirit.”  It says your happiness depends upon using other people for sexual pleasure, rather than being “clean of heart.”  It says that if you are meek and merciful, people will step all over you.

While Pope Francis was reluctant to say that there was a “key” Beatitude, he did emphasize one in particular.  It was “Blessed are the meek.”  He said: “Meekness is a way of being that brings us very close to Jesus.”  Why?  Because after inviting people “who labor and are burdened” to come to him for rest, Jesus said: “Take my yoke upon you and learn from me, for I am meek and humble of heart” (Matthew 11: 28-29).  Our hearts are closest to the Sacred Heart of Jesus when they are meek and humble.

The world thinks of meekness as weakness.  The reality is that meekness comes from great inner strength.  The meek and humble are secure in their identity and do not need to boast or to prove themselves.

In 1 Corinthians 1: 26-31, St. Paul writes against self-promotion and boasting.  These really come from insecurity.  People who promote themselves in front of others aren’t really sure of themselves and so they have to tell others that they are worthy of admiration and praise.

Jesus shows us a different approach.  It’s humility.  Humility isn’t self-depredation, putting oneself down.  Sometimes people do this simply to elicit praise from others.  Humility is truthful.  It recognizes the truth that no one is a “self-made” person.  Everything we are and have is the result of God’s goodness to us.  We would be nothing had God not brought us into existence and given us the health and talents that have allowed us to acquire the possessions and relationships we have.  God is the source of our life and gifts.  All praise ought to go to God, not to ourselves.  We can graciously acknowledge compliments but not rely on them for our sense of self-worth.  Deep inside we know that all praise ultimately echoes to God’s glory.

Focusing on yourself leads to unhappiness.  True humility is not thinking less of yourself (having a negative opinion of yourself, putting yourself down, beating yourself up), but rather, it is thinking of yourself less.  As long as you are the center of your world and attention, you are not humble.  When you put the focus on God and your neighbor, then happiness has breathing space in your life.  The world says happiness is found in “getting.”  The Peace Prayer, attributed to St. Francis, says that “it is in giving that we receive.”

When you focus on yourself your heart fills up with anxiety.  You are either locked into the past, which cannot be changed, or anxious about the future.  You look at the past with regret or sorrow or shame and you develop a negative attitude.  Boasting about present success is like whistling in the dark to distract yourself from the fear that in the future you may not be so successful.  And as you encounter weakness and even failure, your image of yourself plummets.  You feel worthless and unappreciated.

Jesus reveals the secret of happiness.  He was secure in the knowledge that he was the Beloved Son of God the Father who loved him with an infinite love.  He had nothing to prove and no fear of the Father ever not loving him.  He was secure in his identity and did not depend on what others thought of him.  He had no need to impress people with his possessions or talents.  This gave him great freedom and peace.  It attracted crowds of people who followed him not only because he fed them with a miraculous multiplication of loaves and fish and not only because he healed them.  They wanted to know the secret of his joy and vitality.

The “Spiritual Exercises” of St. Ignatius are designed to help us grow in the knowledge that we too are beloved sons and daughters of God the Father who loves us with an infinite love, as though each one of us were “the only one,” the sole focus of God’s attention.  Knowing this love, we naturally want to love in return.  As God has given all, we return all.  Thus the “Exercises” culminate in St. Ignatius’ prayer known as the “Suscipe” in which we offer to God all we are and have, our memory and understanding and entire will.  All that we ask is for God’s grace and love.  With these we are rich enough and want nothing more.

St. Paul, in his Letter to the Romans 8: 38-39, shows that he understood the Beatitudes, the secret to true happiness.  He wrote: “I am convinced that neither death, nor life, nor angels, nor principalities, nor present things, nor future things, nor powers, nor height, nor depth, nor any other creature will be able to separate us from the love of God in Christ Jesus our Lord.”

Jesus concluded his teaching about what makes for true happiness by saying that even insults and persecution are not cause for sadness.  Knowing God’s deep and intimate love for us frees us from being concerned about the opinions of others and their rejection.  The only opinion that matters is not public opinion or even self-opinion but God’s opinion.  And nothing can change that. Not even sin, for “God proves his love for us in that while we were still sinners Christ died for us” (Romans 5: 8).