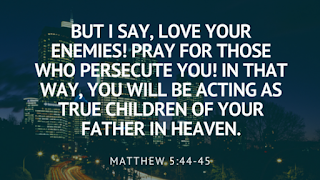 Last Friday I was on Relevant Radio’s “The Inner Life” show with Chuck Neff.  We talked about the Gospel for the Seventh Sunday in Ordinary Time, Cycle A (Matthew 5: 38-48).  You can listen to the show here, but the following are some of the points I made.

Jesus continues his “Sermon on the Mount.”  He challenges us to go beyond retributive justice that inflicts on someone who has done us wrong a similar wrong.  He calls us to give to others not what they deserve but what they need.  And what we all need is love—God’s merciful love.  The practical directives of Jesus—“offer no resistance to one who is evil,” “turn the other cheek,” “hand over your cloak,” “go for two miles,”—should, I think, be taken in the same way that we take Jesus’ directives from last week’s Gospel where Jesus said, “If your right eye causes you to sin, tear it out and throw it away. If your right hand causes you to sin, cut it off and throw it away.”  We do not take those words literally, but we should take them seriously.  In other words, Jesus was saying that it would be better to enter God’s Kingdom of Heaven with one less eye or hand than to end up with eyes and hands intact but alienated from God forever.  We have an obligation to oppose evil people in order to protect the innocent.  We must “go the extra mile” in loving them.

But what does love mean?  The world thinks of it solely in terms of romantic or erotic love.  It sees love primarily as an intense feeling of attraction and pleasure.  But true love—the love Jesus revealed on the cross—is an act of the will.  It means wanting or willing the ultimate good of the other, even one’s enemy or persecutor.  That ultimate good is salvation, heaven.  To love our enemies does not mean we have to like them.  We do not have to work up a feeling of affection for them.  But we must never will the ultimate evil of hell upon them.  Rather, we must pray for the conversion that can lead them to heaven.  In this centenary year of our Blessed Mother Mary’s appearance at Fatima, we follow her call to pray for the conversion of sinners and to do penance for that intention.

One way to pray for our enemies is to try to understand them.  What leads them to hate or persecute us?  I think a lot of sin in the world is recycled hurt.  There is a saying, “Hurt people, hurt people.”  Where the prophet Jeremiah prayed for God to take vengeance on his enemies, to exercise strict justice by giving them the same suffering that they had heaped upon the prophet, Jesus, on the cross, prays to his Father to have mercy on his persecutors because they really do not know what they are doing.  He takes the hurt behind their violence and allows it to be nailed into his body, rather than recycling it.

Jesus “transforms, from within, the act of violent men against him into an act of giving on behalf of these men—into an act of love. What he teaches in the Sermon on the Mount, he now does: he does not offer violence against violence, as he might have done, but puts an end to violence by transforming it into love. The act of killing, of death, is changed into an act of love; violence is defeated by love.  This is the fundamental transformation upon which all the rest is based. It is the true transformation which the world needs and which alone can redeem the world. Since Christ in an act of love has transformed and defeated violence from within, death itself is transformed: love is stronger than death. It remains forever” (“Eucharist, Communion,Solidarity,” June 2, 2002).

Love has the power to transform.  It is the most powerful force in the world.  In his homily at the conclusion of World Youth Day in 2005, Pope Benedict, speaking about the Last Supper, said:

“By making the bread into his Body and the wine into his Blood, he anticipates his death, he accepts it in his heart, and he transforms it into an action of love. What on the outside is simply brutal violence - the Crucifixion - from within becomes an act of total self-giving love. This is the substantial transformation which was accomplished at the Last Supper and was destined to set in motion a series of transformations leading ultimately to the transformation of the world when God will be all in all (cf. I Cor 15: 28).

“In their hearts, people always and everywhere have somehow expected a change, a transformation of the world. Here now is the central act of transformation that alone can truly renew the world:  violence is transformed into love, and death into life.

“Since this act transmutes death into love, death as such is already conquered from within, the Resurrection is already present in it. Death is, so to speak, mortally wounded, so that it can no longer have the last word.

“To use an image well known to us today, this is like inducing nuclear fission in the very heart of being - the victory of love over hatred, the victory of love over death. Only this intimate explosion of good conquering evil can then trigger off the series of transformations that little by little will change the world. All other changes remain superficial and cannot save.”

Now we receive the Body of Christ and are transformed and empowered to be, as Jesus said, “children of your heavenly Father [who] makes his sun rise on the bad and the good, and causes rain to fall on the just and the unjust.”  To love our enemies as Jesus loved his, means being perfect “just as your heavenly Father is perfect.”

The Pharisees thought of being perfect as God is perfect in terms of following the Law perfectly.  They thought that once they had done so, they deserved God’s favor.  God owed them.  Their motivation was not love but self-interest.  Perfectionism generally turns people in on themselves. They live in fear and not in love and their relationship with God and with other people ends up suffering.

Ultimately being perfect as our heavenly Father is perfect is not something we can accomplish by our own will power and efforts.  It requires God’s free gift of grace to which we open ourselves.  That grace is given most powerfully in the Word and the Sacrament which transform us to be children of our heavenly Father, members of the Body of Christ, able to love even our enemies.
Posted by Fr. James Kubicki, S.J. at 11:44 AM