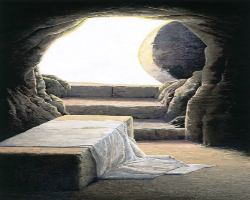 The Gospel for Easter Sunday (John 20: 1-9) offers a contrast between Peter and “the other disciple whom Jesus loved,” traditionally identified as John.  Both ran to the tomb of Jesus, peered into it, and saw “the burial cloths there,” but no sign of Jesus.  Or rather, they did not see Jesus but they did see a sign that pointed to his resurrection.  One saw the sign and that was all while the other saw the sign with the eyes of faith and believed that Jesus had risen from the dead.

Peter saw the cloths and believed what Mary of Magdala had told him—“they have taken the Lord from the tomb, and we don’t know where they put him.”  But why would anyone remove the corpse and leave the burial cloths behind?  Peter saw but did not connect the dots.

John, on the other hand, “saw and believed.”  The cloths pointed to the fact that the dead body of Jesus had not been removed but that Jesus had risen from the dead as he had promised.

Peter sees from a purely physical perspective, without faith.  John sees with the eyes of faith.

We too walk by faith and not by sight.  We see signs of the resurrection, but do we believe?  Really believe that Jesus is alive and is present and at work among us and through us?

Paul wrote that our “life is hidden with Christ in God” (second reading, Colossians 3: 1-4).  Just as Christ, who at this point in the Gospel who has not yet appeared to the apostles in his risen glory, so the full glory of the new life we have in baptism is hidden.  Yet there are signs of this new life already present in us.  What are they?

In the first reading (Acts 10: 34a, 37-43), Peter says that “God anointed Jesus of Nazareth with the Holy Spirit and power. He went about doing good and healing all those oppressed by the devil, for God was with him.”  The Holy Spirit and the power to do good and heal those burdened by evil in our world—these are the signs.

In baptism we were anointed with the Holy Spirit and empowered to continue the work of Jesus.  We do good in our lives and bring healing to those wounded by sin.  In the renewal of our baptismal promises we reject the devil and his works and profess our faith in God and the new life we were given when we were joined to the Body of Christ.  But we need faith to believe, really believe, that we, joined to the Risen Christ, have the power to do good and avoid evil.  We need faith to believe that in the midst of the world’s darkness, the light of Christ shines through us.

In “The Joy of the Gospel” Pope Francis wrote about faith in Christ’s resurrection:

Christ’s resurrection is not an event of the past; it contains a vital power which has permeated this world. Where all seems to be dead, signs of the resurrection suddenly spring up. Often it seems that God does not exist: all around us we see persistent injustice, evil, indifference and cruelty. But it is also true that in the midst of darkness something new always springs to life and sooner or later produces fruit. However dark things are, goodness always re-emerges and spreads. Each day in our world beauty is born anew, it rises transformed through the storms of history (#276).


Do I really believe this?  How can I believe this when the daily news presents a picture of death rather than new life and beauty?  This is where faith enters.  Faith does not remove the struggle.  It requires surrender—to see the signs of death, like the burial cloths, and to believe that this death is not the end.

Faith also means believing in God, believing that he truly loves us, that he is alive, that he is mysteriously capable of intervening, that he does not abandon us and that he brings good out of evil by his power and his infinite creativity.

“Good out of evil!?”  Yes.  We can believe this because God took the worst thing that humanity could do—nailing the Son of God to a cross—and brought about the greatest good—forgiveness of sins and the salvation of the world.  If God can do that, God can do anything.  And so Pope Francis challenges us:

Let us believe the Gospel when it tells us that the kingdom of God is already present in this world and is growing, here and there, and in different ways: like the small seed which grows into a great tree. Christ’s resurrection everywhere calls forth seeds of that new world; even if they are cut back, they grow again, for the resurrection is already secretly woven into the fabric of this history, for Jesus did not rise in vain (#278).

We do not want to simply see, as Peter did, and hold fast to faithless theories. We want to see and believe as John did.  This faith in the power of Christ’s resurrection at work in the world through me and through you leads us to live the new life we’ve been given.  It empowers us to be light in the darkness, to reject evil and to do good.  In that way we answer the challenge that Pope Francis presents at the end of this particular section of his exhortation:

May we never remain on the sidelines of this march of living hope!