Usually the Church celebrates a feast on the death date of a saint.  That is their "birthday" into heaven.  But for three people we also celebrate their earthly births--Jesus (on Christmas Day), the Blessed Virgin Mary (on September 8, nine months after a celebration of her Immaculate Conception), and John the Baptist (today, June 24).  Three months ago we celebrated the Annunciation when the Angel Gabriel told Mary that she would conceive and that her kinswoman Elizabeth was sixth months pregnant with a son, the one who has come to be known as St. John the Baptist.

You and I celebrate the days on which we were born and we also, at the end of our lives, are remembered and prayed for by our friends and relatives.  In between those dates--our birth and our death--we live our earthly lives.  John the Baptist is a great example for how to live those days.

What is the most important lesson that we can learn from John?  Humility.  In the second reading at Mass today (Acts 13: 22-26), in a speech of St. Paul, we hear how John told the many people who had come to follow him that he was not the Messiah, the Anointed One.  In fact, he said, he was even lower than the Messiah's servant: "Behold, one is coming after me; I am not worthy to unfasten the sandals of his feet."

Yet our first reading (Isaiah 49: 1-6), in words that the Church applies to John the Baptist, says that "it is too little for you to be my servant.... I will make you a light to the nations...."  That sounds pretty glorious.  However, light is humble.  We don't turn a light on and then focus our attention on it.  Light is not there to be stared at. It does not draw attention to itself.  Rather, it humbly enlightens a place so that one can find one's way in the dark.

We too are called to be light for others, not to draw attention to ourselves but to help others find their way through the darkness of the world. 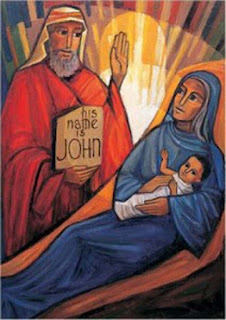 John the Baptist did not try to make a name for himself.  He was given a name by God.  He should have been called "Zechariah," after his father.  But on the day of his circumcision, his parents made it clear that in obedience to God's will, which came to them through the Angel Gabriel, their son was to be named "John."  It's a name that means "God is gracious."  John's identity was to show the graciousness of God who sent the Son to live our life, suffer with and for us, and even share in our death so that we could share in his resurrection.  John prepared the way for the One who embodied the graciousness of God, the goodness and generosity of God.  John pointed to Jesus, the Incarnation of God's graciousness.

You and I were also given a name by God.  It wasn't the name our parents chose for us but the name that we received when we were baptized and joined to the Body of Christ.  We were named "Christian."  We became "other Christs."  The name "Christ" means "Anointed One."  At baptism we were anointed with the Sacred Chrism which is used to consecrate the altar and four walls of new churches, setting that space apart for the sacred purpose of worship.  When I was ordained, the bishop anointed my hands with Sacred Chrism, consecrating them for the sacred purpose of offering worship to God.  And when we were baptized and then confirmed, our foreheads were anointed with that same Sacred Chrism, consecrating each of us for the sacred purpose of offering worship to God.

We do that when we celebrate Mass and offer the perfect worship, joining ourselves to the perfect offering of Jesus as he renews his greatest act of love for the Father and for us.  But our worship doesn't end there.  We go forth and continue our worship in our daily lives, offering every thought, word, and deed, every prayer, work, joy, and suffering to God as an act of love and for the salvation of souls.  Our Daily Offering prayer helps us remember to offer the worship of daily life for which we have been anointed.

Like John, we are now called to live up to our name--Christian.  We are called to be true to the anointing and name that we received at baptism.  We are called not to make a name for ourselves but to make the Name of Jesus known and glorified.  For it is in this Name alone that the world has come to know salvation.
Posted by Fr. James Kubicki, S.J. at 4:58 PM