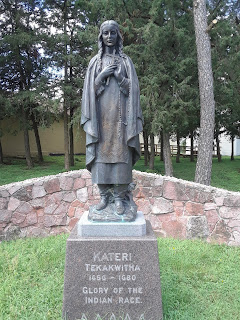 Today is the feast of the Native American saint, Kateri Tekakwitha.  At St. Francis Mission we have an outdoor statue of her and this morning, at St. Thomas church in Mission, S.D. we celebrated Mass in her honor.  Fr. Jacob Boddicker, S.J. serves this parish and here is the homily he gave.