Families in His Presence is a group in the Milwaukee area that fosters Eucharistic adoration for the entire family, including children. The founders of the group approached me a few years ago to help them get established and I sent them to Dick Boldin and the Rosary Evangelization Apostolate who helped them get going. Several times a year they gather families together for Eucharistic adoration in an extended holy hour. Yesterday they gathered at St. Joseph's parish in Wauwatosa and I had the privilege of presiding.

Along with periods of silent adoration, acts of faith and adoration and thanksgiving and love, a decade of the rosary led by a father and his two sons, an outdoor procession with the Blessed Sacrament, and Benediction, I gave a few short talks. 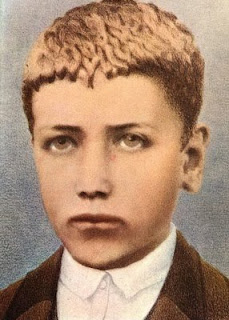 First I showed the children (some of whom were dressed in their First Communion dresses and suits) who came close to the sanctuary where they sat and knelt on mats, a picture of the three Children of Fatima and asked them if they knew who those children were. A few did and from this starting point I talked about Francisco who loved to visit "the Hidden Jesus" in church. Even when he was sick and unable to go to church, he asked others to go visit "the Hidden Jesus" for him. I told the congregation that we were about to bring "the Hidden Jesus" from the tabernacle and place Him in a monstrance where we could see Jesus present in the Blessed Sacrament.


After Exposition and a time for prayer, I talked about why we bow before Jesus present in the Blessed Sacrament. We only bow before God. We do not prostrate ourselves before anyone else. When we bow we express our faith that Jesus, who is God, is present in the Blessed Sacrament. We bow but the Second Person of the Blessed Trinity also bowed low when He became a little baby and grew to become a child and a man. I quoted something Pope Benedict said at his 2008 Corpus Christi Mass:


We Christians kneel only before God or before the Most Blessed Sacrament because we know and believe that the one true God is present in it, the God who created the world and so loved it that he gave his Only Begotten Son (cf. John 3: 16). We prostrate ourselves before a God who first bent over man like the Good Samaritan to assist him and restore his life, and who knelt before us to wash our dirty feet. Adoring the Body of Christ means believing that there, in that piece of Bread, Christ is really there....


God, out of love for His human creatures, first bent over us, and we show our love as we bend before Him.


Then I told the story of the Eucharistic miracle of Santarem, Portugal, a place that I visited when I went on pilgrimage to Fatima last December. The story of this miracle really caught the attention of the little ones. I told them that sometimes Jesus performs miracles like this to help people believe that He is truly present in the Blessed Sacrament, but that we were there in church to show Him that we believed without seeing such a miracle. Jesus told Thomas who believed that He was risen only after he touched Him: "Have you come to believe because you have seen me? Blessed are those who have not seen and have believed" (John 20: 29). Jesus tells us that we are blessed because we believe He is truly present in the Blessed Sacrament.


Lastly, before Benediction, we processed with the Blessed Sacrament through the church and outside to a small altar that was set up. I introduced the procession by referring again to Pope Benedict's homily for Corpus Christi 2008 when he said that our procession with Jesus in the Blessed Sacrament reminds us that on our journey through life Jesus is always walking with us. He does not want us to get lost on our way to heaven and so He not only gives us a map to follow (the Ten Commandments and teachings of the Church) but He also walks with us to guide us. Bringing our Eucharistic Lord outside also declares in a very public way our belief in the Real Presence. Our procession is a prayer that Christ may reign over our streets, our city, our nation, and the entire world.


During the reception afterwards several people thanked me for helping with this special Corpus Christi celebration. But all I could think and say was that I couldn't think of a better way to celebrate this beautiful feast.
Posted by Fr. James Kubicki, S.J. at 3:18 PM