Society Devoted to the Sacred Heart 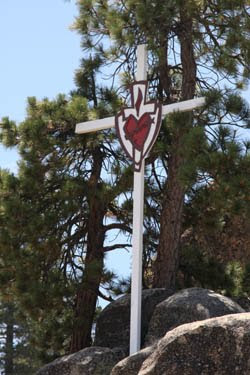 One of the blessings that I receive as I go around the country giving retreats and parish missions is making new friends. Here in Big Bear Lake, California, at the Sacred Heart Retreat Camp, I've become friends with the Society Devoted to the Sacred Heart. I had never even heard of them before being invited to give them their annual eight day retreat based on the "Spiritual Exercises" of St. Ignatius.

They were founded in Hungary in 1940 when Sister Ida Peterfy pronounced private vows. Others, who shared her desire to teach children about the love of God in new and creative ways, soon joined her. Given the situation in Hungary during the Nazi occupation in World War II and the Communist domination following, they did not wear a traditional religious habit. They had to hide the fact that they were teaching people about God. By 1949 things had become so difficult and dangerous that a bishop advised them to flee Hungary to a place where their religious community could develop and then one day return.

In 1950 Sister Ida and five other Sisters made their way to safety in Toronto, Canada where they were able to obtain immigrant status by working as domestic servants for a year. They also supported themselves and their ministry by working during the summer on tobacco farms in Ontario as they learned English.

In 1956 James Cardinal McIntyre of Los Angeles invited them to bring the community to Los Angeles. At this point Sister Ida asked him about adopting a more traditional religious habit with a veil and was told: "Don't change. Mind my words: the Church will need you as you are." In 1985 the Society was formally recognized as a congregation of diocesan right in the Archdiocese of Los Angeles. The Sisters met in a private audience with Pope John Paul II in 1991 and he told them: "You are blessing for the Pope. You are truly American and truly Catholic."

Sister Ida's vision of religious education was always international in scope. She developed media and materials, now used around the world, which teach the Catholic faith in very simple and practical ways. Sisters serve in Los Angeles and neighboring dioceses, as well as in St. Louis where they have an Online Catechism Certificate Program that is part of the Paul VI Pontifical Institute of Catechetical and Pastoral Studies. They also serve in Taiwan and, with the fall of the Iron Curtain of Communism, have returned to Hungary where they form catechists for the entire country as well as in Slovakia, Rumania, and the Ukraine.

Sister Ida died in 2000 but her vision is alive in the 50 Sisters who form the Society Devoted to the Sacred Heart. I'm now giving a retreat to 44 of them, including three of the original group who left Hungary. It's amazing to be part of their history in this small way.
Posted by Fr. James Kubicki, S.J. at 5:08 PM