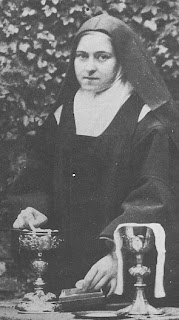 Happy Feast of St. Therese of Lisieux! On October 15, 1885, when she was twelve years old, Therese enrolled in the Apostleship of Prayer and in 2004 she was officially named our co-patron. A good friend, Maureen O'Riordan, has written about this on her web site "Saint Therese of Lisieux: A Gateway." This web site is a treasure trove for anyone who is devoted to or even just curious about this young woman whom Pope St. Pius X called "the greatest saint of modern times."

Maureen and I have corresponded for a couple years and last June, while I was in Philadelphia, we met, had dinner, and talked about St. Therese, of course. Maureen wrote an excellent article entitled "Saint Therese and the Sacred Heart of Jesus" for the U.S. Apostleship of Prayer's web site and a Spanish translation of it can be found on her web site where one can also find an article entitled "St. Therese and the Apostleship of Prayer." Maureen's site has loads of pictures and videos as well as articles about St. Therese's parents, Louis and Zellie Martin who were beatified in 2008. 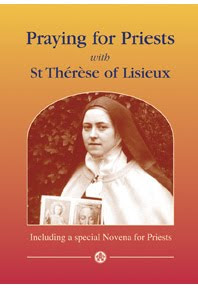 Also, the Catholic Truth Society in Great Britain published an excellent booklet of Maureen's--"Prayer for Priests with St. Therese of Lisieux." It's a Novena that consists of excerpts from St. Therese's letters to priests and seminarians. Information about ordering a copy can be found on the home page of Maureen's web site.

Lastly, my daily YouTube video for today features a reflection on St. Therese, the youngest and most recently named Doctor of the Church.

So, enjoy the feast, and the feast of information you'll find at "Saint Terese of Lisieux: A Gateway."
Posted by Fr. James Kubicki, S.J. at 11:10 AM