As I come to the end of my retreat with the Daughters of St. Mary of Providence, I’m grateful for a surprise favor: learning about their founder, Blessed Louis Guanella, who enrolled in the Apostleship of Prayer when he was he was a twenty year old seminarian in his native Italy.

Fr. Guanella was born in 1842, died in 1915, and was beatified by Pope Paul VI in 1964. On July 1, 2010 Pope Benedict approved a miracle attributed to his intercession, thus opening the way for his canonization. He founded two orders: for women, the Daughters, and for men, the Servants of Charity. This wasn’t their original name. They were first called the Sons of the Sacred Heart, but Fr. Guanella changed that so they would not be confused with other men’s congregations.

It’s clear, though, that devotion to the Sacred Heart was the inspiration for all he did. His early biographer, Fr. Leonardo Mazzucchi, of the Servants of Charity, in his book “The Life, the Spirit and the Works of Father Louis Guanella,” wrote: “He had a deep devotion to the Sacred Heart of Jesus at a time when very few people practiced it. This devotion was to be the most fruitful source of his angelic piety, the inspiration of his particular love for the Blessed Sacrament and his practice of daily communion…. Therefore, he then and always thereafter promoted the Apostleship of Prayer, which is a useful and important form of this devotion” (page 19).

Fr. Guanella wrote an inspiring prayer book entitled, “In the Month of Fervor: Thirty Scriptural Maxims Developed on the Sacred Heart of Jesus for Christian Souls.” The following is a prayer at the end of his reflection for the third day entitled “The Heart of Jesus at His Birth in Bethlehem”:

O Most Holy Heart of Jesus, I cannot love you as the Blessed Mother loved you. I feel bad about it. I would like to love you, as the chaste Joseph did. At least, O Lord, make me love you with simplicity and affection equal to that of the devout shepherds. How happy will I be when I will really begin to love you! How fortunate I will be when, enkindling my accent, I will be able to applaud around you with the choirs of angels, saying: “Glory to God in the highest, and peace on earth to men of good will!”

It should be no surprise that the first church he built was dedicated to the Sacred Heart. Fr. Louis D’Antuono said the following about Fr. Guanella, this church, and the statue of the Sacred Heart in it: “With that he wished to show that they (i.e. the orphans, the aged, the needy women in the house) must not seek comfort except in this divine and compassionate Heart, who living in t 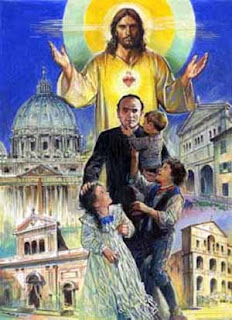 his world felt a lively pity for the poor and the unfortunate. Those poor residents are sick and afflicted, more in heart than in body. Since it is the heart that resents the strokes of bad fortune, it is the heart that gives them the greatest torment. So, there was a need of a heart to cure them and give them the lost peace. Very well then, Father Guanella, knowing that, sought this heart and found it in the Heart of Jesus. So the Church was consecrated to the Divine Heart. Father Guanella wanted to procure consolations for his residents, and gave them a Heart which is the source of every consolation. He wanted to procure mercy for them and gave them a Heart essentially merciful. He wanted to give them a father, a friend, a lover, and gave them the Heart of Jesus, Who is not only the father and friend of the poor but puts Himself in their place: What you do to the poor, he said, you do to me. That statue, raised in the new church, seems to say to all who pass through this blessed door: ‘These poor, these aged, these sick people, these unfortunate ones are my children. Do good to them and I will give you a reward’” (pages 78-9).

The love of the Heart of Jesus led him to especially love those who were most abandoned—the poor, the developmentally disabled, the elderly. Prayer led to service. This too is part of the Apostleship of Prayer. His biographer, Fr. Mazzucchi, wrote:

“In February 1894, Father Louis wrote: ‘We must always pray, but at this time it is necessary that we make prayer a real apostolate.’ So he presented the Apostleship of Prayer, which he wanted to institute in the Church of the Sacred Heart…. Later he wrote: ‘The Apostleship of Prayer is like the center of the devotion to the Sacred Heart of Jesus. The prayer of the agonizing Jesus pierces the Heart of God. This prayer, thus passing through the Sacred Heart, penetrates heaven and earth. In supplicating, the fervent Christian imitates this prayer of the Divine Incarnate Word. Thus the prayer of the good people sustains the world today, that it may not crash under the weight of iniquity’” (page 90).

In June 1912 Blessed Louis Guanella said: “Our Works gushed forth from the most august Heart of God, Who has fructified and sustained them; and we cannot expect them to prosper and be inflamed with charity unless we unite ourselves to the Heart of Jesus Christ to perceive His virtues and draw forth His favors” (page 171).

In summary, we can quote Fr. Mazzucchi again: “We have affirmed that Father Louis Guanella’s piety was directed, above all, to honor and implore the mercies of the Sacred Heart of Jesus present in the Eucharist. As an Apostle of the Eucharist, Father Louis chose the Sacred Heart of Jesus as protector of his Work. Since he knew that daily material and spiritual graces would be abundantly showered from the Divine Heart upon his Houses, he wanted his followers to draw the strength, power of sacrifice, enthusiasm, and tenderness of Christian charity from that same Holy Heart” (page 348).

Blessed Louis Guanella was an Apostle of Prayer whose life was centered on the Heart of Jesus which, in the Eucharist, transformed his own heart. This led to a life of loving service and sacrifice. He lived a Eucharistic life, making an offering of himself with Jesus on behalf of those most forgotten and neglected.

I’m grateful to have discovered this new friend and fellow member of the Apostleship of Prayer.
Posted by Fr. James Kubicki, S.J. at 9:22 AM