Last month it was the threat of bears when I gave a retreat to Sisters in Big Bear Lake, California. This month it's the threat of acorns. All around, the trees are releasing their acorns and so far I've avoided getting beaned. 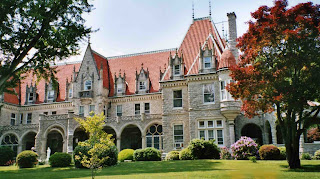 I'm in rural Pennsylvania, near Elverson to be exact, at the St. Mary of Providence Retreat Center. It's located in the beautiful 67 room mansion built in 1894 by Joseph D. Potts, a sixth generation Potts, whose family founded Pottstown, PA and many of the iron works in the area. In 1948 the mansion was sold to the Daughters of St. Mary of Providence and it served as a home for developmentally and physically disabled girls until 1984 when a new facility for them was built in Springfield, PA. Now the mansion and its surrounding buildings serve as a retreat center and housing for seniors.

I'm giving a weeklong retreat to thirteen of the Sisters. It's a retreat I haven't given in a few years and it's based on the 33 invocations in the Litany of the Sacred Heart. On almost every Sunday at noon the Pope, wherever he is--at home in St. Peter's Square or at his summer home at Castel Gandalfo or on the road somewhere--prays the Angelus with the faithful. But before doing so, he gives a little message. At various times from 1985 to 1989, Pope John Paul spoke about the invocations of the Sacred Heart Litany. His Angelus Message on Sunday, July 1, 1984 was entitled "In the Heart of Christ there is a synthesis of all the mysteries of our faith." And in his Angelus Message of June 27, 1982 he said: "This prayer, recited and meditated, becomes a true school of the interior life, the school of the Christian."
This week I and thirteen Daughters of St. Mary of Providence are going to this "school." Though I've been to it before, I find that I can always go deeper. That's because no one could ever plumb the depths of the infinite love that is the Sacred Heart of Jesus.
Posted by Fr. James Kubicki, S.J. at 7:14 PM