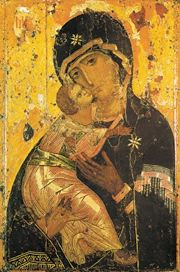 Belated Birthday Greetings to Mary, the Mother of God and our Mother!
I had hoped to make this greeting yesterday but it was a busy day in the office and in my community. So I'm a day late. September 8, nine months after the Solemnity of the Immaculate Conception of the Blessed Virgin Mary, is the Feast of the Nativity of Mary.
We didn't pray the rosary in my family when I was growing up. I remember praying it at wakes and on special occasions in the Catholic grade school I attended. It certainly wasn't part of my spiritual life in high school. So when Fr. John Eagan, S.J. proposed that I and my five friends who were about to leave Milwaukee on a two week camping trip with him in the summer of 1969 pray a rosary as we drove, I rolled my eyes. The rosary wasn't cool. Seven of us were crammed into a station wagon: three in the front seat, three in the back seat, and one in the very back behind all the equipment and supplies. That was the choice spot that we all took turns getting because the one in that spot didn't have to lead one of the decades of the five decade rosary. In fact, being in the back as the car rolled down the highway, he didn't have to respond. He could nap or read or just zone out.
By the end of the trip something had happened to me. It was my turn to sit in the back of the wagon and not participate in praying the rosary. But I declined. I wanted to pray the rosary. I can't recall the reason anymore. Somehow, on a level below any conscious reasons, I felt good praying the rosary.
After my high school graduation I went off to college, commuting 35 minutes in a car my parents had bought me for that purpose. I began my commute praying the rosary. Most of the time I recited the prayers fast to get through them and then turn on the radio to the local pop station. Nevertheless, the rosary had become part of my life and I can't help thinking now that in connecting myself to Mary in this way, she somehow came to play a greater and greater role in my vocation.
After one year of college I entered the Jesuit novitiate. At night, before our common prayer at 10, I would take a walk and pray the rosary. A couple times a week, when I returned to the novitiate at night after working as an orderly at a nursing home, I walked back from the bus stop praying the rosary. And when it came time to finish the novitiate and pronounce perpetual vows as a Jesuit, I considered Mary to be the Mother of my vocation. Jesuits don't change their names when they enter the novitiate or take vows as other consecrated persons, both men and women, often do. But we do have a tradition of taking a devotional vow name. It's an option and the six of us who pronounced vows as Jesuits in St. Paul, Minnesota in August, 1973 all took a vow name. I remember one took "Jeremiah" and another took "Ignatius." I took "Mary." As the Mother of my vocation, that was only natural. Moreover, my middle initial was already "M" for "Michael," so it worked well. Now, when I sign official documents and include my middle initial, I sign "M" for "Michael" but also think of it as "M" for "Mary."
That's why I didn't want to miss the opportunity of celebrating my Mother's birthday this year.
Posted by Fr. James Kubicki, S.J. at 10:57 AM