I'm giving a parish mission at St. Alphonsus Liguori Parish in Zionsville, Indiana, a suburb of Indianapolis but part of the Lafayette Diocese. It's a very active parish and their website is phenomenal. One could make it a home page just for all the resources it has. My mission is based on Pope Benedict's Apostolic Exhortation "Sacramentum Caritatis" and each night I'm covering one of the three ways that the Holy Father describes the Eucharist: a Mystery to be Believed, Celebrated, and Lived. I'm also preaching at the 9 AM Mass each day.

Today I talked about the serpent on the pole and Jesus on the cross. Both are sources of healing but how very different each one is. In the first reading at Mass (Numbers 21: 4-9) Moses took the image of a serpent (which had bitten the complaining Israelites) and mounted it on a pole. "Whenever anyone who had been bitten by a serpent looked at the bronze serpent, he lived." The symbol of punishment, sin, evil, and death became the source of healing. 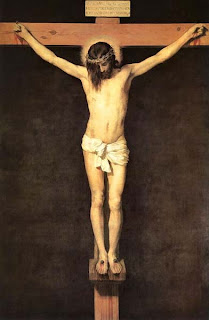 In the Gospel (John 8: 21-30) Jesus declared, "When you lift up the Son of Man, then you will realize that I AM...." Jesus, the innocent one and author of life, when lifted up on the cross, will become the source of life for all who acknowledge him as God. I couldn't help thinking of the crucifixion scene in an old movie where the centurion next to the cross, played by John Wayne, says "Truly, this was the Son of God!" (Matthew 27: 54). Jesus is "I AM," the name God revealed to Moses (Exodus 3: 13-15).

How is it that these two passages go together and that Jesus Himself used the passage from Numbers to refer to himself: "And just as Moses lifted up the serpent in the desert, so must the Son of Man be lifted up, so that everyone who believes in him may have eternal life" (John 3: 14-15)? Two passages from St. Paul can help us here. First, Galatians 3: 13: "Christ ransomed us from the curse of the law by becoming a curse for us, for it is written, 'Cursed be everyone who hangs on a tree.'" And secondly, 2 Corinthians 5: 20: "For our sake he made him to be sin who did not know sin, so that we might become the righteousness of God in him." In other words, Jesus took sin and death into himself and in that way destroyed them because he, the innocent one and author of life, had the power to do so.

This action of Jesus is given to us anew in every Mass when Jesus is lifted up again. His passion and death are made present every time we celebrate Mass. In his being lifted up at the Consecration, sin and death are overcome and we believe in him. One way that people have traditionally expressed that belief is to silently pray, when the host is lifted up and then when the cup is lifted up, the words of St. Thomas: "My Lord and my God!" (John 20: 28). This is essential to what we believe about the Eucharist. Our belief is not only that bread and wine become the Body and Blood of Christ, but that every Mass makes present the saving action of Jesus on Calvary. Pope John Paul II, in his Apostolic Letter announcing the Year of the Eucharist Mane Nobiscum Domine (#15), put it this way:

There is no doubt that the most evident dimension of the Eucharist is that it is a meal. ... Yet it must not be forgotten that the Eucharistic meal also has a profoundly and primarily sacrificial meaning. In the Eucharist, Christ makes present to us anew the sacrifice offered once for all on Golgotha. Present in the Eucharist as the Risen Lord, he nonetheless bears the marks of his passion, of which every Mass is a "memorial"....
Posted by Fr. James Kubicki, S.J. at 2:17 PM