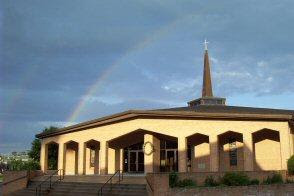 I'm at St. Paul's Church in Fenton, Missouri, a suburb of St. Louis, where I preached at five Masses this weekend in order to drum up interest in the parish mission which will begin tomorrow evening and go through Thursday evening. On Monday night I'll be talking about "The Transforming Power of Baptism" and then on each of the successive evenings I'll talk about the Baptismal call to be prophets, priests, and kings or royal people.

It's providential that the pastor, Msgr. Michael Dieckmann, asked for this topic when I presented him some options a year ago. Baptism was the focus of Pope Benedict's message for Lent this year. In the first part of his message, the Holy Father wrote: "Baptism is not a rite from the past, but the encounter with Christ, which informs the entire existence of the baptized, imparting divine life...." We don't reflect on this enough. We tend, like Samuel in the first reading at Mass today, to judge by appearances. Like the Pharisees we focus on externals and do not appreciate the truth of Jesus and the truth of ourselves whose deepest identity is that of children adopted into God's family. Divine life is at work within us. In the conclusion of his message, Pope Benedict called Lent "the journey of conversion towards Easter [that] leads us to rediscover our Baptism." He continued: "This Lent, let us renew our acceptance of the Grace that God bestowed upon us at that moment, so that it may illuminate and guide all our actions." 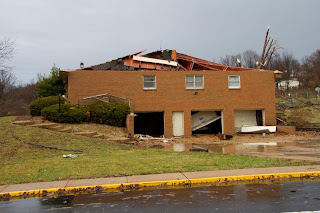 The two priests at St. Paul's are in the process of moving back into the rectory which was extensively damaged by a tornado that landed on Fenton last New Year's Eve. I'm staying in a house that they rented less than a block from the church. Today the temperature reached 85 and storms are predicted tonight as a front approaches that will drop the temperatures back down into the 40's. Such drastic changes can only mean one thing: the possibility of severe weather. What are the chances that a tornado will hit here again just three months after the last one? Stayed tuned....
Posted by Fr. James Kubicki, S.J. at 8:47 PM