"A Call to a Deeper Love" 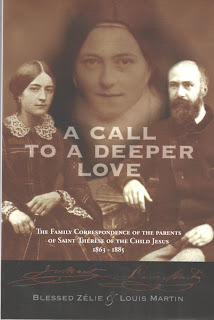 Today is the feast of the parents of St. Therese of Lisieux, Zelie and Louis Martin, and my friend Maureen O'Riordan, whose web site "Saint Therese of Lisieux: A Gateway" is a great resource, recently informed me that a book of their letters has just been published in English. It's called "A Call to a Deeper Love" and it consists of 16 letters of Louis which have survived and 218 of Zellie's letters. In his homily at the time of their beatification on October 19, 2008, Cardinal Jose Saraiva Martins said: "This beatification of Louis Martin and Zelie Guerin, whom Therese defined as parents without equal, worthy of heaven, holy ground permeated with the perfume of purity, is very important in the Church. My heart is full of gratitude to God for this exemplary witness of conjugal love, which is bound to stimulate Christian couples in practicing virtue just as it stimulated the desire for holiness in Therese."

Maureen shared with me part of a message she received from a young woman who wrote her senior thesis on Therese last spring. Here's what she wrote: "You don't know how excited I am about this edition of the letters of Blessed Zelie and Louis Martin coming out in English. It's just been bumped up to the top of my summer spiritual reading list. I'm incredibly excited to delve deeper into the world of these two married blessed. Since I myself have been discerning marriage as my vocation, it'll be wonderful to see what it means to be a saint as a married woman. I can't wait to get my hands on a copy so that I can start reading it. Thank you so much for letting me know about it!"

St. Therese enrolled in the Apostleship of Prayer in 1885 when she was twelve years old and is our second patron saint, along with St. Francis Xavier on whose feast the Apostleship began in 1844. I've always thought that St. Therese learned the spirituality of making an offering of her life and her day through both her parents and the Apostleship of Prayer, and so I'm interested in learning more about these two holy people through this book of their letters. I've ordered my copy through Maureen's web site and encourage anyone who is interested in St. Therese and the family in which she grew up to do so as well.
Posted by Fr. James Kubicki, S.J. at 1:38 PM