Most Catholics are aware that changes will be coming to the Mass. On the First Sunday of Advent, November 27, 2011, the Third Edition of the Roman Missal goes into effect with some significant changes to the prayers and responses in the Mass. Back in 2005 I remember how much time it took me to adjust to one little change that happened in the Eucharistic Prayer. I was so used to saying Pope John Paul’s name that after he died and Pope Benedict was elected to succeed him it took a while to get used to the change. In a few months I will need to pay close attention to the Sacramentary and the changes to the prayers that I’ve come to learn by heart and everyone will need the help of a booklet or a missalette to help them participate in the celebration of the Mass.

I think that’s a good thing. I see the changes as an opportunity to pray the Mass better. An unfortunate human tendency is to get into routines in which we repeat something and become so accustomed to it that our minds wander away from what we’re doing. I think that happens at Mass. It even happens to priests celebrating Mass when they go on “automatic pilot” and lose track of where they are and what they are saying. We all need to commit ourselves to “praying the Mass” and the changes in the language of the liturgy is a golden opportunity for us to recommit ourselves to doing that.

I recently ran across a very good book, one that can help all of us pray the Mass. It’s "A Biblical Walk Through the Mass" by Edward Sri and published by Ascension Press. This is a timely and timel 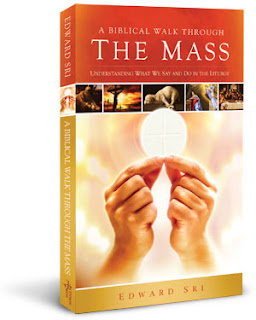 It is timely because of the changes that are coming. In less than 150 pages Dr. Sri presents the changes and the reasons behind them. He shows how the new prayers and responses are much more Biblical and he explains the various parts of the Mass. I couldn’t help thinking of another Scripture scholar, Dr. Scott Hahn, and his conversion story. He was a Presbyterian who went to Marquette University to get a doctorate in theology and Scripture. One day he snuck into the lower church of Gesu, the church where I was ordained. Later, in his book “Rome Sweet Home” he called this a “fatal blunder” for he discovered that the Catholic Mass was not the superstitious worship that he had thought. It was, rather, “steeped in Scripture.” He wrote: “I wanted to stop everything and shout, ‘Hey, can I explain what’s happening from Scripture? This is great!’”

Dr. Sri’s book is the explanation of the Scriptural basis of the Mass. In that sense, it is not only timely but timeless. I wish that this book had been available when I was in the seminary 30 years ago. It is clear and concise. My copy is now thoroughly highlighted and I suspect I’ll be referring to it from time to time to help me to avoid routine and to pray the Mass with greater understanding and fervor. Its subtitle is definitely on the mark: “Understanding What We Say and Do in the Liturgy.”
Posted by Fr. James Kubicki, S.J. at 2:02 PM

Email ThisBlogThis!Share to TwitterShare to FacebookShare to Pinterest
Labels: Eucharist