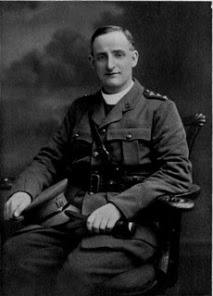 Though he's not one of the 10 official patrons of World Youth Day (see the official site to find out who those 9 saints plus 1 blessed are), Jesuit Father Willie Doyle is someone to whom I'm praying this week. WYD 2011 officially opened in Madrid Spain yesterday, which happened to be the anniversary of Fr. Doyle's death during World War I. He was a chaplain and was killed in battle as he tended to the sick and dying.

I'm asking his intercession for the young people of the world during this important week for two reasons.

One is because he fits Pope Benedict's description of youth in his Message for World Youth Day 2011. Reflecting on his own experience growing up, the Holy Father wrote:

In thinking of my own youth, I realize that stability and security are not the questions that most occupy the minds of young people. True enough, it is important to have a job and thus to have firm ground beneath our feet, yet the years of our youth are also a time when we are seeking to get the most out of life. When I think back on that time, I remember above all that we were not willing to settle for a conventional middle-class life. We wanted something great, something new. We wanted to discover life itself, in all its grandeur and beauty. Naturally, part of that was due to the times we lived in. During the Nazi dictatorship and the war, we were, so to speak, “hemmed in” by the dominant power structure. So we wanted to break out into the open, to experience the whole range of human possibilities. I think that, to some extent, this urge to break out of the ordinary is present in every generation. Part of being young is desiring something beyond everyday life and a secure job, a yearning for something really truly greater. Is this simply an empty dream that fades away as we become older? No! Men and women were created for something great, for infinity. Nothing else will ever be enough. Saint Augustine was right when he said “our hearts are restless till they find their rest in you”.

I can't help thinking that Fr. Doyle embodied this desire for greatness. He was a hero in the best sense of that word.

But there's a second reason that I'm asking Fr. Doyle to intercede for the youth of the world. On Saturday, Pope Benedict will consecrate them to the Sacred Heart of Jesus. Leading people to the Sacred Heart was Fr. Willie Doyle's own deepest desire. In a quote from his writings that appears in the book Merry in God, we read:

My intense desire and longing is to make others love Jesus and to draw them to His Sacred Heart. Recently at Mass I have found myself at the Dominus Vobiscum opening my arms wide with the intention of embracing every soul present, and drawing them in spite of themselves into that Heart which longs for their love. "Compel them to come in," Jesus said. Yes, compel them to dive into that abyss of love. Sometimes, I might say nearly always, when speaking to people I am seized with an extraordinary desire to draw their hearts to God. I could go down on my knees before them and beg them to be pure and holy, so strong do I feel the longing of Jesus for sanctity in everybody; and since I may not do this, I try to do what I find hard to describe in words--to pour out of my heart any grace or love of God there may be in it, and then with all the force of my will to draw their hearts into the Heart of Jesus.

Please join me in praying with Fr. Doyle for the youth who will be at World Youth Day and for all young people as they prepare for Saturday's consecration to the Sacred Heart. May Fr. Doyle intercede for each one of them and draw them into the Heart of Jesus!

To find out more about Fr. Willie Doyle, S.J. go to the blog "Remembering Fr William Doyle SJ". My friend Fr. Mark Kirby also wrote about Fr. Doyle the other day on his blog "Vultus Christi".