I've been in Milwaukee all week, holding down the fort at the Apostleship of Prayer national office. Fr. Phil Hurley has been in Spain. I've tried to follow the events of Magis and World Youth Day and want to share some of those experiences here.


What is "Magis?" It's Latin for "More" and it's a theme that appears in the life of St. Ignatius and the order he founded, the Jesuits. For St. Ignatius, it wasn't enough to live and work for God's glory. He wanted to give his life for God's greater glory. That's the "more," the "magis." 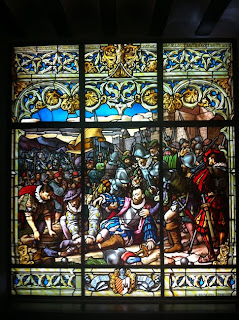 Magis was a pre-World Youth Day program that brought together, from around the world, people associated with Jesuit schools and apostolates. They broke into small groups and engaged in service projects and pilgrimages. Some went to the birthplace of St. Ignatius where he also experienced his conversion and some others went on the Camino, the road to Santiago Compostela, to the shrine of St. James the Apostle to which pilgrims have journeyed for centuries.


Since the Magis program did not accept pilgrims under the age of 18, some Jesuit schools, like Jesuit High in New Orleans, made their own pre-WYD pilgrimage to the Ignatian sites. I was inspired by a blog entry of one of their chaperones, a Jesuit scholastic or seminarian, Nathan O'Halloran, which can be found here. There are other photos and descriptions of their pilgrimage here. I commented on Nathan's blog that I found these to be a "virtual pilgrimage" for one who stayed home. Through these two links I not only saw the sights but also experienced some of the grace of the pilgrimage.

Fr. Phil Hurley and the Apostleship of Prayer were present at the largest English-speaking venue at WYD in Madrid, the Love and Life site. He was part of a panel that talked about prayer and he sent us the link to the video that Salt + Light TV from Canada made of the presentations. His own contribution can be found on the video from 1:36:40 to 1:47:34 at the following site:

I commented on our Facebook page that I wouldn't be surprised if we start getting requests for Fr. Phil to sing after he displayed his musical talent in the video.

Though a rain storm spoiled some of the Saturday night vigil, I'll be blogging more about that another time....