No Limits to God's Mercy

Today is the feast day of St. Faustina, the Apostle of Divine Mercy. When Jesus appeared to her in the 1930's, he told her that his greatest attribute was mercy. His mercy, like his love, is infinite. The only limit to it is the one we place on it. In other words, God is always ready to forgive and even sends graces to move our hearts to return to him. We limit God's mercy in our own lives and in those of others by our refusal to receive mercy and to give mercy.

The Mass readings today underscore this. The Prophet Jonah is angry that God has forgiven his enemies after he fulfilled God's command to warn them that their sins were leading them to destruction. God shows Jonah that he wants to forgive and not destroy, that he is "concerned" over the more than 120,000 people "who cannot distinguish their right hand from their left." In other words: people who were never taught right from wrong, or who were taught it but really did not understand. They were like those who crucified Jesus and for whom he prayed: "Father, forgive them for they do not know what they are doing."

In the Gospel (Luke 11: 1-4) Jesus teaches his disciples to pray, calling upon God as Jesus himself did: "Father". God is the one Father whose human children made in his own image and likeness must forgive one another as their Father forgives them. 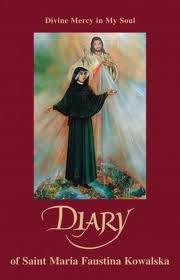 Jesus directed St. Faustina to write a diary that contained her thoughts, prayers, and the words of Jesus to her. In one passage (#723) Jesus said: "The greater the sinner, the greater the right he has to My mercy." "Right"? That's not a word we would think of in this context, but Jesus declares that because he came to forgive sinners, they are the ones who have the most claim on his mercy.

Another passage (#1183) is a prayer that St. Faustina wrote. It sounds very much like the "one day at a time" spirituality of the Morning Offering:

"O Jesus, I want to live in the present moment, to live as if this were the last day of my life. I want to use every moment scrupulously for the greater glory of God, to use every circumstance for the benefit of my soul. I want to look upon everything, from the point of view that nothing happens without the will of God."

"O my Jesus, I now embrace the whole world and ask You for mercy for it. ... Poor earth, I will not forget you. Although I feel that I will be immediately drowned in God as in an ocean of happiness, that will not be an obstacle to my returning to earth to encourage souls and incite them to trust in God's mercy. Indeed, this immersion in God will give me the possibility of boundless action."

Thus, St. Faustina is a great friend and intercessor. May we all become channels and instruments of God's mercy as well.
Posted by Fr. James Kubicki, S.J. at 3:47 PM