The Spirit of Jeanne Jugan 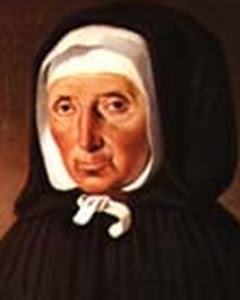 I'm finishing my retreat with the Little Sisters of the Poor whose foundress was canonized in 2009. St. Jeanne Jugan, also known as Sister Mary of the Cross, was born in France in 1792. We celebrated her birthday yesterday with special prayers at Mass and a birthday cake for dinner. Her spirituality includes the Sacred Heart and Immaculate Heart devotion of St. John Eudes whose congregation for lay women--the Third Order of the Admirable Mother--she joined. She was also deeply influenced by the Brothers of St. John of God who cared for the sick and took a vow of hospitality in addition to the vows of poverty, chastity, and obedience. After caring for a homeless elderly woman, even going so far as to giving up her own bed, she was joined by others who wanted to help and by 1847 they had started four houses for the elderly poor. By 1851 there were 300 Sisters serving more than 1,500 people in 15 houses. Blessed Pius IX approved them as a religious congregation in 1854. Today the Little Sisters of the Poor keep the spirit of their foundress alive in 32 countries on 5 continents.
When the canonization of Jeanne Jugan was announced, Francis Cardinal George, then president of the U.S. Conference of Catholic Bishops, said: "As the Church anticipates the canonization of Jeanne Jugan ... we might recall the words of Pope John Paul II at her beatification: 'God could glorify no more humble a servant than she!' The quiet but eloquent radiance of her life continues to shine out in the lives of the Little Sisters of the Poor today.... These residences are icons of mercy where Christ is welcomed and served in the elderly poor with the utmost respect for their dignity."
Last Sunday, Saints John and Paul Parish in Larchmont, NY blessed an icon of St. Jeanne Jugan and began a new ministry called "Family Jeanne Jugan." I've always thought that our local parishes should be places where people care for one another's needs. When people find themselves in need the first place that they should think of looking for help should be their parish. This would give tremendous witness to the world: "See how they love one another." Taking their inspiration from St. Jeanne Jugan, who gave up her own room and bed to help a poor woman, this Larchmont parish has committed itself in the following way:
"We will identify the elderly among us who are most in need. These individuals will then be matched with three volunteer families who will coordinate assisting with doctor visits, weekly errands and attendance at Mass, or Communion in the home. Together, these families and seniors will form a small community rooted in Trinitarian Love."
May this new initiative bear good fruit and inspire many others to follow the example of this parish and the Little Sisters as they reverence the dignity of people whom society at large is increasingly viewing as burdens.
Posted by Fr. James Kubicki, S.J. at 6:49 PM