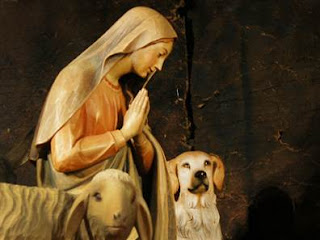 While the Scriptures do not mention a dog at the first Christmas, it makes sense that there was one there. The shepherds probably had a dog or two to help them guard their sheep and the dog would have naturally followed them to Bethlehem. Yet, few Nativity scenes show a dog.

This year, at St. Patrick's Cathedral in New York City, Msgr. Robert Ritchie added a dog modeled after his own dog "Lexington." In fact, Demetz Art Studio in Ortisei, Italy, the same studio that carved the other figures in the Cathedral's Creche, created the Christmas dog as well.

One of my favorite places in the Holy Land is the church at Shepherd's Field. The paintings in the corners of the rounded ceilings show the various scenes of Luke 2: 8-20 where an angel appears to shepherds as they were tending their flocks and they go to Bethlehem to see the child about whom the angel had spoken. In each of the scenes there is a dog, barking at the angel 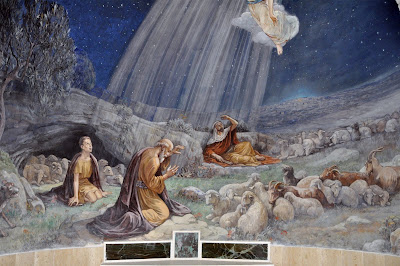 when it appears, racing off with the shepherds, and then adoring the Christ Child with them. 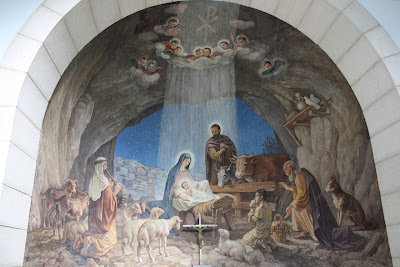 Here's a poem I ran across recently in a 1952 book edited by F. J. Sheed, The Book of the Saviour. It's by Sister Maris Stella and it's entitled "Christmas Carol for the Dog."


This is a carol for the dog
that long ago in Bethlehem
saw shepherds running towards the town
and followed them.

He trotted stiffly at their heels;
he sniffed the lambs that they were bringing;
he heard the herald angels sing,
yet did not know what they were singing.

With tail erect and tilted ears
he trotted through the stable door.
He saw the shepherds kneeling low
upon the floor.

He found St. Joseph watching by
Our Lady with her newborn Boy,
and being only dog, he wagged
his tail for joy.

There stationed by the Baby's crib
he kept good guard through the long night,
with ears thrown back and muzzle high
and both eyes bright.

When the three tall kings came at last
he barked a warning to each one,
then took his stand beside the Child,
his duty done.

Down into Egypt went the dog
when Herod slew the innocents.
He was not wise. He did not know
why, whither, nor whence,

but only, being dog, he knew
to follow where the Family led
to Egypt or to Nazareth.
And no one said

a word about the sharp-nosed dog
who stuck close to the Family then.
And yet, there must have been a dog.
This is a song for him. Amen.
Posted by Fr. James Kubicki, S.J. at 3:09 PM

Email ThisBlogThis!Share to TwitterShare to FacebookShare to Pinterest
Labels: Christmas