On Fire with the Love of God

The prayers at today's Mass in honor of the great Jesuit missionary St. Francis Xavier speak of fire and zeal and longing. The Collect or Opening Prayer asks that "the hearts of the faithful may 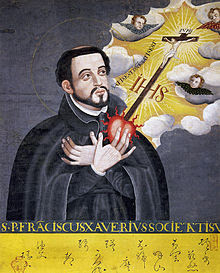 burn with the same zeal for the faith" that burned in the heart of Francis Xavier. The Prayer over the Offerings reminds us that this missionary "journeyed to distant lands out of longing for the salvation of souls." Finally, the Prayer after Communion asks that the mysteries just celebrated may "kindle in us that fire of charity with which Saint Francis Xavier burned for the salvation of souls."

What was the source of this ardent zeal and longing for the salvation of every soul, every person? It was Francis Xavier's awareness of God's love for him and for all. It was the love of God revealed in Jesus whose heart, as we hear in today's Gospel from Matthew, "was moved with pity" for the crowds who followed him. Through the "Spiritual Exercises" of his closest friend, St. Ignatius of Loyola, Francis was captured by the love of God. His heart was set on fire and he could not keep the fire within but had to spread it to India, the Islands of the East, and Japan. On this day in 1552, on an island just off the coast of China where he hoped to spread the Gospel, Francis died.

Through Baptism we are called to be missionaries as well. We may not be called to leave home to evangelize people who have never heard of Jesus. We are certainly called to pray and offer sacrifices for the work of evangelization in the manner of St. Francis Xavier's co-patron of the missions, St. Therese of the Child Jesus and the Holy Face. We can only do this if we, like St. Francis Xavier and St. Therese, are so captured by the love of God that we cannot keep the knowledge of this love to ourselves. With hearts on fire with the longing of the Heart of Jesus for the salvation of all people, we offer ourselves one day at a time for the salvation of souls.

On this day in 1844, a group of Jesuit seminarians who were on fire with the desire to be missionaries, were challenged to follow that call immediately by making an offering of themselves and their day for the spread of the Gospel. This was the beginning of the Apostleship of Prayer. Happy Feast and Happy Anniversary!
Posted by Fr. James Kubicki, S.J. at 7:31 PM