Yesterday was the feast of St. Christopher (or in Spanish Cristobal) Magallanes and Companions, martyrs during the terrible persecution of the Church in Mexico during the 1920's.  The Mass readings of the day fit perfectly into their feast because in the last verse of the Gospel (John 16: 29-33) Jesus proclaimed:  "In the world you will have trouble, but take courage, I have conquered the world."

Why will we have trouble in the world?  Because the upstart prince of this world is Satan who is engaged in a war against Christ and his followers, indeed against the human race whom he hates.  St. Ignatius called Satan "the enemy of our human nature."  He has sought to destroy individuals and our race from the beginning.  Thus it is to be expected that in the world we "will have trouble."

But Jesus tells us to "take courage."  I always like to point out that the root of that word "courage" is "cor" or "heart."  Jesus tells us to take heart, to take his Sacred Heart.  We take and receive his Heart in the Eucharist where he comes to us Body and Blood, soul and divinity, including his Heart.  His Heart transforms our hearts so that no matter what happens to us we can be strong in the knowledge of God's love. 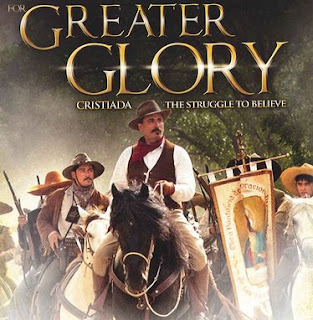 The 22 priests and 3 laymen were a few of the many who were killed during what is known as the Cristero War of 1926-29.  As the Mexican government forbade priests and religious to wear distinctive garb, limited their numbers, and closed down schools and seminaries, Catholics joined in peaceful protest.  Some rose up in open and violent rebellion.  It's estimated that at least 40 priests were killed.  There are also 13 other martyrs who have been beatified, including a 14 year old boy named Jose Sanchez del Rio.

Soon the movie "For Greater Glory" which tells the story of the Cristero War will be released in the U.S.  For a trailer of the movie, see here. 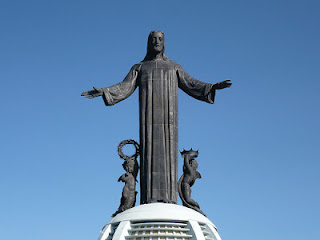 During this time of persecution, the Mexican government blew up a shrine to Christ the King which was located on Cubilete Hill, the geographical center of Mexico.  It was rebuilt in 1944 and Pope Benedict visited it during his recent trip to Mexico.  The statue shows Christ the King with two crowns, one that is royal and the other of thorns.  In his talk there Pope Benedict said the following: "Dear brothers and sisters, this monument represents Christ the King. But his crowns, one of a sovereign, the other of thorns, indicate that his royal status does not correspond to how it has been or is understood by many. His kingdom does not stand on the power of his armies subduing others through force or violence. It rests on a higher power that wins over hearts: the love of God that he brought into the world with his sacrifice and the truth to which he bore witness. This is his sovereignty which no one can take from him and which no one should forget."

Some have said that what happened in Mexico in the first half of the 20th Century could happen here in the U.S.  In fact, our bishops have called for a "Fortnight for Freedom" to engage Catholics in praying and working to safeguard religious freedom.  The USCCB web site has information about this special time that will run from June 21, the eve of the feast of Sts. John Fisher and Thomas More, Martyrs of Conscience and Religious Liberty, until July 4.

Christ the King has conquered the world as he said when he died and rose from the dead.  He is the victor over Satan and sin and death.  The Mexican Martyrs knew this and it gave them the courage to live and die for the faith.  Recognizing that Christ is the true ruler of this world, let us share in the cry that was on their lips when they died: Viva Cristo Rey!