The last few weeks have been very busy at the Apostleship of Prayer and they have culminated with today's annual meeting of our board of directors.  Fr. Joseph Koterski, S.J. has served for three consecutive five year terms, which is the limit.  He has seen the Apostleship through a significant time of change and renewal, serving a number of those years as president of the board.  We began our meeting with Mass and in his homily he made a comment that I want to share.

He said that the translation for the beginning of Mary's Magnificat, the great prayer of praise that she spoke in response to her cousin Elizabeth's words upon meeting her at the Visitation, is not a good one.  The current translation, in trying to make Mary's prayer better understood, loses something of the original Greek and the Latin and the English of the older Douhay translation.  In the current translation we have: "My soul proclaims the greatness of the Lord; ..."  This is very different from the word which gives us the title of this 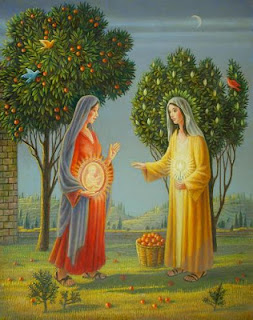 prayer--Magnificat.  In Latin we have: "Magnificat anima mea Dominum."  Or, as the Douhay translation goes: "My soul magnifies the Lord."

Fr. Koterski thought that the translators were perhaps afraid that "magnifies" would make it sound as if Mary was "making God greater" or adding to God's greatness.  So, he speculated, they chose to have Mary saying that her soul proclaims the greatness of the Lord.  I agree with Fr. Koterski that something is lost in this translation.  The something is the great mystery of how humans can cooperate with God and "magnify" his greatness.  When Mary said "yes" to God's will, the greatness of God's love became even greater because through Mary's cooperation God became flesh.  The Son of God shared our human nature.  When Jesus was conceived in Mary's womb, he grew, becoming physically greater.  In a very real sense Mary, always with the help of God's grace, made God greater, just as creation is made greater by the incarnation, the Word of God becoming flesh.

All of us, in our own way, when we say "yes" as Mary did, "magnify" God's greatness.  Perhaps the analogy of a magnifying glass can help.  The sun is powerful and burns, but the power of the sun can be concentrated and magnified through a magnifying glass.  So too the Son of God.  He is all-powerful, but he loves us so much that he invites us to share in his work of redemption.  Our lives, like the life of Mary, magnify God's power, concentrating it in the places where we live and work and recreate.  Like Mary, we give flesh to the Son of God because we are members of his Body.  God is great.  We cannot really add to God's greatness.  But his grace at work in us allows us to become magnifying glasses for his love and power to enter the world.  Like a good parent showing love for his or her children by inviting them to share in the work of cooking or fixing, God shows his love for all his children by inviting us to share in his work.  Though it makes no mathematical sense, his infinite love becomes greater by our magnification which is all the work of his grace.  This is why Mary also said: "the Almighty has done great things for me!"
Posted by Fr. James Kubicki, S.J. at 3:36 PM