Fr. Guanella and the Daughters

On December 15, 1912, Fr. Luigi Guanella boarded a ship to take him across the Atlantic to the United States.  He was 70 and the winter seas were rough.  He spent most of the time sick  in his cabin and as the ship was tossed around he probably thought about another ship named "Titanic" that tried to make this same journey only eight months earlier.  He was on his way to Chicago where the archbishop had asked for the help of a community of Sisters which he had founded.  He carried a letter from his friend, Pope Pius X, which read:

"Fr. Guanella undertakes this journey to explore the possibility of beginning a foundation directed by his Sisters to assist the mentally and physically disabled of every age and social background in order to care for them and look after their needs.  We bear witness that these dear Sisters here in Rome and anywhere else are very appreciated because of their committed ministry and obedience to the holy charism of their institute.  They perform miracles of true charity."

On December 23 the ship carrying Fr. Guanella docked in New York.  Over the next one and a half months he visited Boston, Providence, St. Louis, Cincinnati, Buffalo, Utica, New Haven, Baltimore, and Washington, as well as Chicago where he laid the groundwork for the first Sisters to follow him.  He would have liked to have gone to Genoa City, Wisconsin where some of his relatives had lived and died, but he did not have time to make that trip.  He left the U.S. in early February and arrived back in Naples on February 22, 1913.

Who are these Sisters about whom Pope St. Pius X spoke so highly?  In 1871 two sets of siblings, the Bosatta sisters and the Minatta sisters, came together with the encouragement of their pastor to care for the orphans and the sick in their village.  They were called the "Pious Union of the Daughters of Mary Immaculate."  In 1881 Fr. Guanella was sent to take the place of their deceased pastor and in time they changed their name to what it is today--the Daughters of St. Mary of Providence.  From this small beginning they have spread throughout the world in order to create, in their words, a "culture of charity," by caring for the poor and abandoned, the elderly, and especially the developmentally disabled. 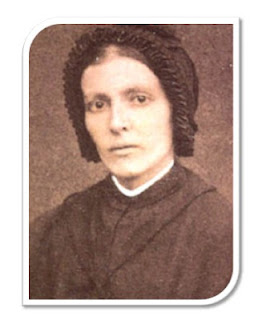 One of the original four, Clare Bosatta (1858-1887), was beatified in 1991.  Fr. Luigi Guanella, who was himself beatified in 1964 and canonized in 2011, was amazed at her deep spirituality and took it upon himself to read St. Teresa of Avila and St. John of the Cross, the great Carmelite mystics and doctors of the Church, in order to be a better spiritual director for her.  He wrote the following about her.  His words are a reminder to us that because the Son of God united in himself a divine nature and a human nature, and because he said that whatever we do for the least of his children we do for him, our own longing for God is partially satisfied on earth not only in prayer but in our service of our least brothers and sisters.

"Clare wanted God; she wanted to be able to hug Him physically and see His face if she could, but not being able to do that, she extended her hugs to the creatures who could attract her to Him and from whom she could draw a drop of water that could quench her heart which was always thirsty for God."
Posted by Fr. James Kubicki, S.J. at 10:58 AM