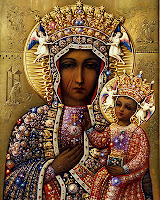 Today's feast of the Holy Name of Mary was first celebrated in Spain in 1513 but was extended to the whole Church as an act of thanksgiving by Pope Innocent XI. What was he thankful for? The victory of Christians forces over the Turkish army which had besieged the city of Vienna for two months. Pope Innocent XI had appealed to the leaders of Europe to come to the aid of Vienna and on August 15, 1683, King Jan Sobieski of Poland, answered the call and brought together their armies. On the way to Vienna, he and the army that began to gather, stopped in Czestochowa and prayed before the image of Our Lady that is there. Marching toward Vienna, the army prayed the rosary and the king gave them for their battle cry "In the Name of Mary: Lord God, help!"

Here is a description of the Battle of Vienna from Adam Zamoyski's book The Polish Way.

They reached the heights of the Kahlenberg just before nightfall. From this vantage-point the king and his generals surveyed the great plain stretching into the distance, cut across by the winding course of the Danube. At their feet lay the city of Vienna. Only the occasional flash of a cannon from its battered ramparts and the distress-rockets rising periodically into the evening sky from the tower of St. Stephen's Cathedral confirmed that after sixty days of siege the garrison was still holding out.

The proud Habsburg capital was dwarfed by a larger city, a sprawling encampment of many thousand tents which pullulated with a quarter of a million soldiers, slaves, camp-followers and houris; with horses, camels and buffalo. ...

"He's badly camped--we shall beat him!" said the king, turning to his generals. Few of them shared his confidence, but they trusted his experience, his reputation, and the renown of the strange-looking regiments he had brought with him. A beacon was lit on the heights to inform the defenders of the dying city that help was at hand. This signal did not unduly worry Kara Mustafa. He had over a hundred thousand fighting men securely entrenched with plenty of artillery, and he was convinced that no serious threat could come from the Kahlenberg: a large army would have chosen a longer route through the plain. His own army did not fear the solid but slow-moving Austrian and German troops, their unadventurous generals or their pusillanimous emperor, who had abandoned his capital. The only Christian general they held in awe was Jan Sobieski, the King of Poland. But he, Kara Mustafa believed, was still hundreds of miles away in Krakow.

Just before dawn on the following day, 12 September 1683, the King of Poland attended Mass in the ruins of an old convent on the Kahlenberg. ... Only about one third of the 68,000 troops were Polish--the rest were Germans, Italians, Frenchmen, Spaniards, Scots and Irishmen. ... The king felt tempted to put off the decisive battle to the following day, even though this would give the Turks time to turn the heavy guns bombarding Vienna to face his army. ... Instinct made the king change his mind....

Zamoyski goes on to describe the battle in which the Polish cavalry or Husaria, with eagle feathers on their backs rising above their heads, cut through the Turkish encampment and sent the Turkish army . 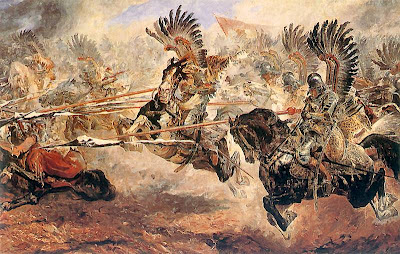 This battle, which was crucial to the future of the whole of Europe, had not been hard-fought, and the casualties on both sides were light. It had been won principally by the prestige of Jan Sobieski and his army. In 1683 Poland was the largest state in Europe....

As Pope Innocent XI recognized, there was another reason for the victory. Grace came to the aid of nature and that grace came through the powerful intercession of the Blessed Virgin Mary. Our secularized world tends not to see it that way and so today we tend to rely more on human than heavenly means in the battles we face. Today's feast is a reminder to seek and to trust in heavenly help, especially the help of her whom the first book of the Bible prophesied would crush the serpent (see Genesis 3:15).
Posted by Fr. James Kubicki, S.J. at 1:15 PM

Email ThisBlogThis!Share to TwitterShare to FacebookShare to Pinterest
Labels: Mary