Today I celebrated Mass at the University of Wisconsin-Milwaukee Newman Center. Here is my homily for this Sunday when we hear the parable about two different kinds of prayer.

We have one more month left in the Year of Faith and today's readings are about faith and prayer.

In the gospel (Luke 18: 9-14) Jesus tells a parable about two men who went to the temple to pray. 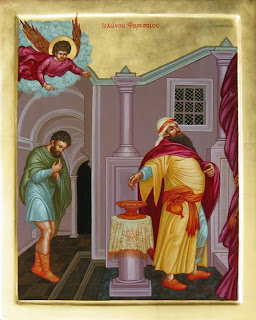 Remember: a parable was a story that is intended to shock the listener into deeper reflection. This particular story of Jesus would certainly have shocked his listeners who would have thought that the Pharisee's prayer had been accepted while the tax collector's prayer had been rejected. After all, Pharisees scrupulously observed the Law of God and prayed and fasted and tithed, while tax collectors collaborated with the unjust and hated Roman occupation government and took some of the money they collected.  They were dishonest and known as "public sinners."

Yet Jesus turns it all around. The tax collector leaves the temple "justified" while the Pharisee doesn't. The key to the difference is humility and faith.

The Pharisee has no humility and his faith is in himself. He is so proud of himself that, according to Jesus, his prayer is addressed "to himself." He congratulates himself on his virtuous life. He compares himself to the tax collector whom he  puts him down. In speaking his prayer to himself, he has made himself a god.

The tax collector, on the other hand, has humility and has faith not in himself but in God to whom he addresses his prayer. He knows his need and he turns to God.

In the second reading (2 Timothy 4: 6-8, 16-18) St. Paul writes to his co-worker Timothy as he approaches his death.  He declares: "I have kept the faith." It is not faith in himself or his own abilities but in God.  We see that in a very clear way in two other letters of Paul.

In Romans 7 Paul writes about his interior conflict: "What I do, I do not understand. For I do not do what I want, but I do what I hate. ... So now it is no longer I who do it, but sin that dwells in me. ... The willing is ready at hand, but doing the good is not. For I do not do the good I want, but I do the evil I do not want."  Remember: this is Paul writing after his profound conversion when he went from a proud Pharisee to an apostle of Jesus Christ. Then Paul, declaring his helplessness, gives praise to God his savior: "Miserable one that I am! Who will deliver me from this mortal body? Thanks be to God through Jesus Christ our Lord."

In 2 Corinthians 12 we see once again the humility and faith of St. Paul. Having just written about someone who had been given great revelations, Paul makes it clear that he is talking about himself: "because of the abundance of the revelations ... that I might not become too proud, a thorn in the flesh was given to me, an angel of Satan, to beat me, to keep me from becoming too proud." We don't know what this thorn was. Some speculate it was a particular physical ailment that slowed Paul down in his missionary work and others think it was a particular moral struggle or temptation. At any rate, Paul didn't like it and thought that he would be a much better person and apostle without it. So he prays: "Three times I begged the Lord about this, that it might leave me...."  The answer he received was "No." The Lord told Paul: "My grace is sufficient for you, for power is made perfect in weakness."

"Power is made perfect in weakness!"  Tell that to the front line of the Green Bay Packers!

But God's ways are not our ways. The Lord is telling Paul that without this weakness, this struggle, he would become too proud and would rely upon himself. He would revert back to the ways of a Pharisee and would end up having faith in himself, praying to himself, and despising everyone else who didn't measure up to his own level of perfection. Paul's struggle brings him to his knees in humble prayer to God.

Sometimes people wonder what is the point of praying, of making petitions to God. Isn't God all-knowing and all-powerful? So what's the point of bringing our needs and desires to God who knows them before we articulate them and who can answer them if he wishes?

Two things actually limit God's power and both are related to the fact that God is Love.

First, God loves us and therefore invites us to collaborate with him. If we don't choose to do so, then we limit God's influence in the world. For example, in the gospels there are stories of how Jesus was unable to perform miracles in certain places because of the lack of faith. Faith-filled prayer opens a way for God's power and grace to enter the world.

But, this loving power and grace can never take away human freedom. That brings us to the second limit to God's power--human freedom. God loves his human children too much to take away their freedom and to force them to love him in return or to do his will. Our prayers for those who have left the practice of the faith or who are wandering in a self-destructive life style cannot force the person for whom we are praying to turn to God and change. They do not take away the person's freedom.

What about praying for good things that both we and the person for whom we are praying desire? Like good health and healing. Sometimes it seems God does not answer those prayers. It seems so but isn't so. God answers every prayer but sometimes the answer that is given is the one St. Paul received when he asked God to take away his weakness. Sometimes it's the answer Jesus received in a garden called Gethsemane when he prayed that the cup of his suffering and death would be removed.

God sees the bigger picture and God's ways are not our human ways. God saved the world through weakness which revealed a power greater than mere human power. Helpless, nailed to a cross, the Son of God revealed the power of divine love which took away the sins of the world and destroyed death.

The celebration of the Eucharist declares our faith in that power. We remember how God saved the world: not through brutal force and violent power, but through a weakness greater than human strength. We celebrate and make present the power of love revealed on a cross. Such a celebration calls forth from us humility and faith. This is our greatest humble and faith-filled prayer.
Posted by Fr. James Kubicki, S.J. at 9:27 PM