St. Francis and the Sacred Heart 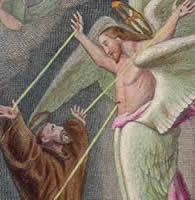 St. Francis of Assisi had a deep devotion to the wounds of Jesus, so much so that he was given the mystical gift of the stigmata. This happened four days after the Feast of the Exaltation of the Cross on September 17, 1224.  More than 450 years later Jesus spoke to the great apostle of the Sacred Heart, St. Margaret Mary.  This was before He revealed His Sacred Heart to her. He told her that she was going to have to face many trials and sufferings but that St. Francis would be her special patron and guide.

Why did Jesus choose St. Francis for this job?  St. Margaret Mary offers this answer:  "On the feast of St. Francis [1673], our Lord let me see in prayer this great saint, clad in garments of light and unspeakable brilliance. He had been raised above the other saints to an extraordinarily high degree of glory, because his life was so like that of the suffering Redeemer who is the life of our souls and the love of our hearts. His glory was the reward of his great love for the Passion of our Lord, a love which rendered him worthy of the sacred stigmata and made him one of the great favorites of Jesus' heart."

Through devotion to the Passion of Jesus, to His Wounds, and to His Wounded Heart, St. Francis and St. Margaret Mary knew the love of God which is stronger than all sufferings and even death. In a time of uncertainty and change, the love of God revealed in the Heart of His Son is a sure and steady refuge.  Holding fast to that love, to the Heart of Jesus, we need not fear.
Posted by Fr. James Kubicki, S.J. at 5:10 PM